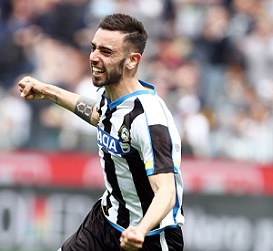 Today’s trip back in time sees us revisit the first weekend of April 2016, when a young Bruno Fernandes stole the show in Udinese’s victory over Napoli in Italy’s Serie A.

Fernandes was 21 and in his fourth season in Italian football; his third with Udinese who were battling relegation and ultimately survived by a single point. The midfielder’s individual campaign was good enough to earn him a summer move to Sampdoria, and a brace against Napoli in a 3-1 win on Sunday 3rd April was a standout moment.

A penalty in the 14th minute converted by Fernandes gave the home side the lead, but Maurizio Sarri’s Napoli soon levelled through Gonzalo Higuain. The moment of the match arrived on the stroke of half time when Udinese’s Portuguese midfielder scored a stunning overhead kick after good work from Duvan Zapata, with the Le Zebrette wrapping things up with a third after the interval.

Four years ago this weekend, Bruno Fernandes was in fine form for Udinese against Napoli with two goals in a 3-1 win, including a penalty and this acrobatic finish #onthisdayPA #MUFC
pic.twitter.com/zrJ4aCfTz6

"End of the road"

By the close of the season, Fernandes was ready to make the next step. "I’ve reached the end of the road and I think this is the right moment for a definitive step up in quality,” he told reporters as a move back to his homeland was mooted. Ultimately it was the city of Genoa and Sampdoria where he would land next, spending a year with the La Samp during which time he scored five goals.