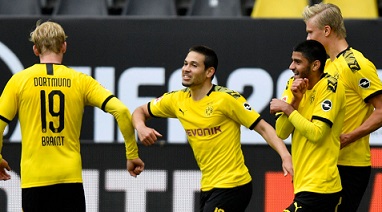 German football resumed this weekend and Portuguese duo Raphaël Guerreiro and André Silva were among the goals on a lively return to action.

Borussia Dortmund recorded the standout result of the day with a 4-0 victory over Ruhr rivals Schalke in the Revierderby, with Guerreiro the Man of the Match with after goals. Later in the day, Silva came off the bench to score a consolation for Eintracht Frankfurt in their 3-1 defeat to Gladbach.

Guerreiro’s brace for Dortmund saw him take his league goals tally to seven in just 21 appearances. The return sees the 25-year-old equal his best-ever goalscoring season in league football, which was set during the 2014-15 campaign in France’s Ligue 1 with Lorient.

Two thirds of the Portuguese contingent in the Bundesliga are at Frankfurt, but Gonçalo Paciência was ruled out of their match with Gladbach with a minor injury. Fellow striker Andre Silva was named on the substitutes bench, and was called on at half time with the hosts 2-0 down. The former Porto man saw his side go three goals behind before pulling one back with a calm finish for his sixth goal in his last ten appearances.

The Bundesliga II is also back underway and tomorrow will see Hamburg, with Portuguese goalkeeper Daniel Fernandes, travel to Greuther Furth, while Nurnberg and Iuri Medeiros head to St Pauli.