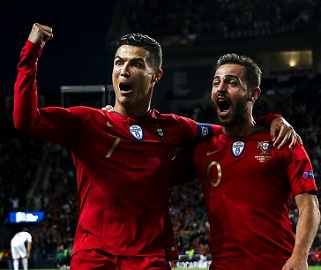 Bernardo Silva has been speaking about Seleção captain Cristiano Ronaldo, with the Manchester City man praising Ronaldo’s ability to arrive at the key moments to decide games – even in training.

Bernardo, who recently returned to England from Portugal to prepare for a possible resumption of the Premier League, joked that it can sometimes be frustrating the extent to which Ronaldo is the match-winner.

“I think what makes him so great is his mentality. He is 35-years-old and it has been more than 15 years that he has played at the top level and he is not tired,” Bernardo said.

“I think what is annoying about him, in a way, is that in a training session, you play a game, and it is 1-1. The manager says whoever scores wins, and it is always him. It is not only in the games. When a game is stuck and you don’t know if you’re going to win or not, you know that if you give him the ball, he is the guy who decides; something special might happen when he has the ball.

HAHAHAHA what a terrible problem to have!