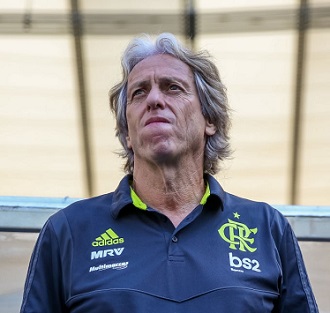 Jorge Jesus has finally ended speculation over his future by extending his contract with South American champions Flamengo by a year until 2021.

The veteran Portuguese was nearing the end of the 12-month deal he signed last year, after which he made history by leading Flamengo to five major titles. Jesus’ achievements – particularly in winning the Copa Libertadores – has made him a huge favourite among the Rubro-negra supporters who eagerly awaited his commitment to further success.

Jesus was presented to the media alongside President Rodolfo Landim, Vice President of football Marcos Braz and Executive Director Bruno Spindel at a press conference on Friday to announce the new deal, which runs until next June.

“We are very happy to officially announce the contract renewal with Jorge,” president Landim declared. “The players are very happy with this news that he and his staff are staying. And especially the fans who were waiting for this good news. He is our great leader in all this revolutionary process that we have had since the middle of last year, which culminated in very important titles for Flamengo.”

“I’m in a place that makes me happy” - Jesus

With Flamengo back in training ahead of the new Brazilian league season, Jesus is preparing his side for the defence of their crown in the knowledge that fans will not be present in the stadium during the initial phase of the season. During his speech at the press conference, the former Braga, Benfica and Sporting boss gave special mention to the club’s support.

“Whether I'm in a place that makes me happy is the number one factor of my choice,” he said. “I search for sporting happiness which is what motivates me. Flamengo, like any club, is only big when it has a huge following. When I arrived in Brazil, they had already told me that it was one of the biggest clubs in the world in terms of fans.

“Today, fortunately, after a year, we are increasingly becoming bigger, including in a sporting sense. And the fans are a part of that greatness. I do not forget the affection throughout this time, it was very important. In the first games, they will not be in the stadium, but they will be in our hearts. And we will always play for them!”

Since arriving in Brazil, Jesus has presided over 51 games, with 38 wins, 9 draws and just four losses. During that time Fla have lifted the Copa Libertadores, the Brasileiro, the Brazilian Super Cup and the Recopa Sul-Americana, in addition to the Guanabara Cup. Renowned for their stylish play, Mengão have scored 118 goals and conceded 45.