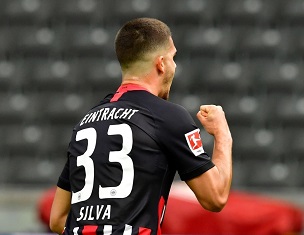 André Silva came off the bench to score twice and assist another as Eintracht Frankfurt recorded an impressive 4-1 win at Hertha Berlin in the Bundesliga on Saturday.

The goals take Silva’s league tally into double figures and mean the former Porto man now has nine goals in his last 12 appearances for Frankfurt, who have now won three of their least four Bundesliga games.

Silva entered the action at half time with the visitors trailing 1-0 in the capital, but with a numerical advantage after Hertha’s Dedryk Boyata was sent off just before the break. Within five minutes of his introduction the Seleção man had made an impact, nodding the ball towards goal for ex-Sporting striker Bas Dost to convert and level the match.

With Frankfurt now in the ascendency against 10-man Hertha, Silva scored to put them 2-1 up just after the hour mark with the moment of the match. Superb approach play from midfielder Daichi Kamada saw the Japanese square the ball for Silva, who finished from close-range with a superb flick using the inside of his foot.

Evan N’Dicka put Frankfurt 3-1 up with a stunning left-foot finish from the edge of the area, before Silva added a fourth with five minutes remaining. Stefan Ilsanker’s through-ball put Silva one-v-one with goalkeeper Rune Jarstein and the Portugal man finished with a confidence typical of his current form.

"I knew how I could help"

Speaking after the match, Silva told reporters: “On the bench I knew how I could help the team when I came on. Everyone was full of confidence because we had an extra man. I came in with my energy, that’s it (laughs). I am getting better, mentally and physically. I work hard every day. I don’t always get it right, but today I felt good and it went well.”