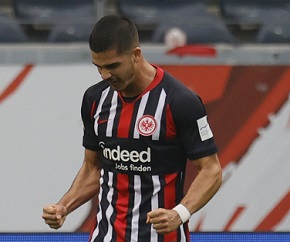 André Silva now has 10 goals from his last thirteen appearances for Eintracht Frankfurt in Germany, after another assured finish against Schalke on Wednesday evening.

The Portuguese striker put his team ahead on 28 minutes with an assured finish and Frankfurt went on to win 2-1 and secure their fourth victory in their last five Bundesliga games.

The Portuguese grabs his seventh goal in eight games as he combines with Kamada to delay effect 👊 pic.twitter.com/kPZPywFvNK

Former Porto man Silva is currently on a 2-year loan deal with Eintracht from AC Milan. Recent reports have suggested both clubs are keen to make the deal permanent, while Silva has expressed a desire to stay with his current team.