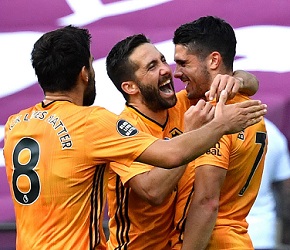 The Premier League is back underway and there has been no shortage of Portuguese involvement across the major stories in the English top flight. Pedro Neto marked his return to action by continuing his impressive second half of the season at Wolverhampton Wanderers with a sensational volley in his side’s victory at West Ham United.

Neto’s strike came the day after José Mourinho’s Tottenham Hotspur were denied victory over Manchester United by a Bruno Fernandes penalty, leaving Spurs’ Portuguese boss resentful of the spot-kick award in the capital.

Wolves’ extensive Portuguese contingent were the only Luso representatives on show in the Premier League’s four fixtures on Saturday, with Domingos Quina not selected for Watford as they drew 1-1 with Leicester, for whom Ricardo Pereira is still an injury absentee. Fellow full-back Cédric Soares is also still on the sidelines and was unable to take part in Arsenal’s 2-1 defeat to Brighton & Hove Albion.

Nuno Espírito Santos took his Wolves team to London looking to extend a 5-match unbeaten run from before the break. Nuno’s men had kept clean sheets in four of those matches and another against West Ham this weekend gave a platform on which the West Midlands outfit ran out 2-0 winners. Rui Patrício, João Moutinho, Rúben Neves and Diogo Jota all started, while Pedro Neto (64’) and Rúben Vinagre (90’) were late introductions. Daniel Podence and Bruno Jordão remained unused substitutes.

The deadlock remained until the 73rd minute when Nuno’s changes played a major part in tipping the match in Wolves’ favour, as former Benfica striker Raul Jimenez headed in substitute Adama Traore’s cross to open the scoring. Ten minutes later the lead was doubled and Neto, who had replaced Jota, stole the headlines by meeting another cross from the right – this time from Matt Doherty – with a perfect left-footed volley at the back post to secure the points.

Speaking after the match, Neto told Sky Sports: “It’s an unbelievable feeling to come back and have this result. After three difficult months we came back, we win and I’m happy that I scored a goal. But we’re already focused on the next one. [Scoring goals] is the best feeling in football, I missed it a lot.”

"Football without fans doesn't mean anything"

For Nuno, a victory which puts his team level on points with 5th place Manchester United in the table, and the former Porto coach was impressed with his players but regretful that supporters were not there to share the triumph. “It was not enjoyable,” he said. “A game of football without fans doesn’t mean anything. This game deserves fans.

“All game we were organised, stayed in shape, reacting to every possession. We have to improve, but we are in the right way.

“The substitutions? In this situation, it had a big part. The impact of the players coming in can change the game on whatever team.

“It’s up to us to manage the momentum of the players and try to use them in the right moments.

“Neto’s goal? It was perfect.” 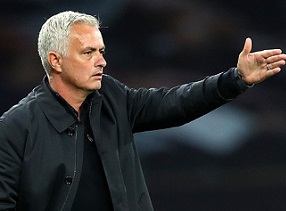 Nuno’s men were able to close the gap on Manchester United in 5th after the Red Devils played out a 1-1 draw with Tottenham the previous evening. José Mourinho’s Spurs led for a large period of the game through Steven Bergwijn’s 27th-minute opener, but a late penalty from Bruno Fernandes (81’) earned United a share of the spoils.

The result could have been worse for Mourinho as United were awarded a second penalty during the closing stages when Fernandes went down, but the decision was overturned upon VAR review. Speaking after the match, Mourinho raised questions about both spot-kick awards, having seen Paul Pogba adjudged to have been fouled for the first call by referee John Moss.

Mourinho, who introduced Gedson Fernandes for the last twenty minutes, told reporters: “On the first penalty, the referee – he made his decision and I agree it’s difficult for referees but then the VAR is a different story. Referees can make mistakes but I don’t think VAR should make mistakes [in terms of not overruling].

“The second penalty is incredible. It’s a foul on Serge Aurier which should kill the situation and then there is a situation in the box [with Fernandes diving]. I feel when the VAR goes for a simulation, the player should be exposed and [given] a yellow card. So I feel really upset with these two decisions but that’s the way it is.”

Fernandes’ goal means the Portuguese has either scored or assisted in seven of the eight matches he has played since his debut. Although perhaps not quite at his best across the ninety minutes, the former Sporting man provided a wonderful set-up for Anthony Martial from which the Frenchman should have scored not long before the penalty, while Fernandes and second-half introduction Paul Pogba continue to show signs of forging an ominous threat to opposing teams during the remainder of the season.

The brilliance of Bruno Fernandes pic.twitter.com/JOLik3ePda