GERMANY: André Silva signs off with another goal to boost Seleção 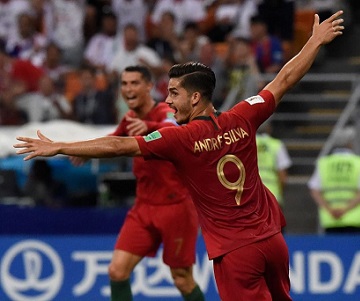 André Silva’s typical poacher’s goal for Eintracht Frankfurt on the final day of the Bundesliga season on Saturday was a fitting end to the campaign for arguably Portugal’s most in-form player.

The former Porto striker found the net after a little over half an hour of Frankfurt’s victory over Paderborn, and it meant Silva ended the German league season having continued his best goal-scoring run since leaving Portugal three years ago.

Silva has scored eight goals in 11 appearances since the re-start of football in Germany, and ends the campaign with 16 goals from 39 appearances. The 24-year-old’s strike-rate in the league is especially impressive with 12 goals from 16 starts (9 substitute appearances) which puts him in 8th place on the top goalscorer list despite reduced game-time.

Not only is this the first time Silva has hit double-figures in the league since leaving FC Porto in 2017, his extended impressive form in 2020 stretching back to before the break represents his most consistent period in years and a huge boost for Portugal boss Fernando Santos as he assesses his forward options.

What a unique season and today we couldn’t have end it without a victory 💪
I want to thank all the team for being part of my success and for let me show my very best!
Thank to all the fans for being supportive even when not there in person. Hope to see you next round soon! pic.twitter.com/p7wk2nWzy9

Silva has not found the net for the Seleção in over 18 months but his strong goal-scoring record for his country (15 goals in 34 caps) aids his case as a player many hope will re-emerge as an important player on the international stage. Recent evidence suggests the Porto native is more than ready for the challenge.

Happy to see Andre finding some form and Frankfurt are still a decent team to watch, even after losing Jovic. The end of the season came too soon for Andre but hopefully he'll keep his confidence and carry on next season. Cant see them coming...

Happy to see Andre finding some form and Frankfurt are still a decent team to watch, even after losing Jovic. The end of the season came too soon for Andre but hopefully he'll keep his confidence and carry on next season. Cant see them coming back to beat Basel tho.