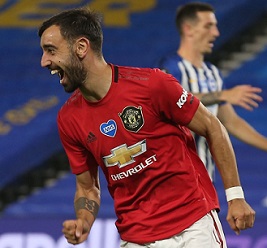 Bruno Fernandes scored twice in a game for the first time since joining Manchester United as the Red Devils cruised to a comfortable 3-0 win over Brighton & Hove Albion on Tuesday.

The visitors were in charge from the first whistle and imposed their play on Brighton with ease ahead of going two goals up inside half an hour through Mason Greenwood and Fernandes. The Portuguese then added a second after the break from a Greenwood cross to cap a fantastic United counter-attack and put the seal on three well-deserved points.

Fernandes had already been the man closest to breaking the deadlock when he struck the post with a right-footed shot from the edge of the area early on, shortly after which Greenwood put United in front with a smart finish. What Fernandes lacked in fortune on that occasion he recovered with his goal, as a shot likely intended for the left side of the goal took a deflection before nestling in the right bottom-corner on 29 minutes to double United’s lead.

The former Sporting man scored the third and final goal less than five minutes after the re-start and it was a memorable team effort from United. Harry Maguire won the ball in the air in defence and ex-Benfica man Nemanja Matic played a super volleyed pass out to Greenwood for the young Englishman to find the oncoming Fernandes at the back post, where he finished with typical assurance.

The win for United is their third in-a-row in all competitions and has Ole Gunnar Solskjaer’s team just two points behind 4th-place Chelsea, although the Blues do have a game in-hand. For Fernandes, five goals in eight Premier League appearances and his first goals from open play since the resumption of football in England.

“I was lucky in the first goal, but also the ‘keeper was lucky in my first shot, the ball hit the post.” pic.twitter.com/0IlCaDbH69