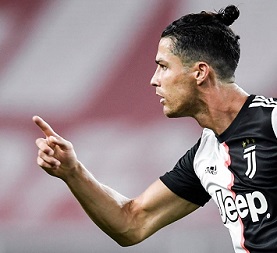 Cristiano Ronaldo scored a sensational long-range goal as Juventus turned on the style to beat Genoa 3-1 in Serie A on Tuesday evening and maintain their four-point lead at the top of the table.

Juve scored three brilliant second-half goals though Paolo Dybala, Ronaldo and Douglas Costa to make it six consecutive league victories, after which boss Maurizio Sarri said he believes the combination play between his forwards is improving.

Dybala put the visitors ahead five minutes after the re-start with a fantastic individual goal, finished on his left foot, before Ronaldo inevitably took centre stage. Five minutes after Dybala’s opener, Ronaldo received the ball just inside the Genoa half and carried possession until unleashing an unstoppable shot past Mattia Perin from 25 yards.

Douglas Costa rounded off the scoring on 72 minutes with a beautifully-placed shot into the top corner, after which Ronaldo was substituted as Juve survived a late consolation scored by Andrea Pinamonti. Speaking after the match, Juventus coach Sarri said he felt the synergy amongst the forward players is showing signs of progress.

“Something has changed in terms of movements, but they have learned to look for each other more often,” Sarri confessed. “They have realised that by benefitting from each other, both reap the rewards. It’s something I have noticed in training too.

“In the first half [Ronaldo] went for the shot five times, so it means he was doing more than he should. Cristiano often plays to free himself to finish, but when he decides to move the ball quickly, he is the best of them all.”