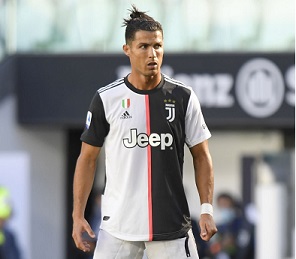 Cristiano Ronaldo followed up his stunning long-range goal in midweek with another special strike from a free-kick as Juventus beat local rivals Torino to edge closer to the Serie A title.

In scoring in the 4-1 derby victory, Portugal captain Ronaldo reached another notable career achievement as he became the first Bianconeri player to reach 25 league goals since 1961.

Paulo Dybala opened the scoring for Juve with a smartly-taken individual goal, before Ronaldo registered an assist after carrying the ball from inside his own half to the edge of the Torino area and feeding Juan Cuadrado, with the Colombian finishing well.

Andre Belotti pulled one back for Torino on the stroke of half time from the penalty spot in first-half stoppage time, but Ronaldo restored Juve’s two-goal advantage on the hour. The Portuguese dispatched a superb free-kick into the top corner, giving veteran Torino goalkeeper Salvatore Sirigu little chance as the ball nestled under the crossbar, before a Levy Djidji own goal rounded off the Juve scoring late on.

Speaking after the match, Ronaldo told reporters: “I really needed that free kick goal so I could get some confidence back. We knew it would be a difficult game, but we worked hard, won and are now putting pressure on Lazio. We achieved the objective today.”

Ronaldo’s strike takes him to 25 Serie A goals, scored in just 26 appearances, and means the Seleção man becomes the first Juventus player to reach the milestone since Omar Sivori in 1961.