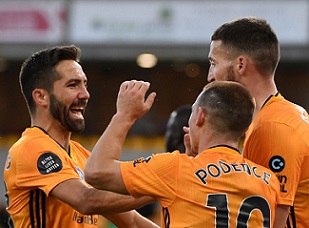 Daniel Podence scored his first goal for Wolverhampton Wanderers as Nuno Espírito Santo’s side beat Crystal Palace to move back into 6th place ahead of the final day of the season.

João Moutinho was the architect of the former Sporting winger’s first-half opener with a sumptuous pass during the build-up, which ended with Podence defying his small stature by heading Wolves in front in what was a vital win.

Nuno selected four of his Portuguese contingent for the match, hoping to leapfrog back over José Mourinho’s in-form Tottenham Hotspur into the final Europa League spot. Rui Patrício, João Moutinho, Rúben Neves and Podence all kept their place, while Diogo Jota and Rúben Vinagre dropped to the bench alongside Pedro Neto and Bruno Jordão.

Podence, who had an early attempt with a scissors kick which connected well but missed the target, was to open the scoring and his account for Wolves five minutes before the break. Full-back Matt Doherty played a superb one-two with Moutinho, whose chipped return to the Irishman was sensational, leading Doherty to simply slide the ball across for Podence to head home from close range.

That was a sublime pass 👏

Podence has his first goal for Wolves... pic.twitter.com/EKRZ4qF2cQ

Pedro Neto and Diogo Jota came on during the second half, during which Johnny Castro sealed the win with Wolves’ second, leading to Nuno’s side already beating last season’s points tally with a game to spare. The newly promoted side registered 57 points on their return to the top flight last term, and have exceeded that high standard with 59 points ahead of a final-day trip to Chelsea on Sunday.

“The words of building and improving makes sense,” Nuno said after the match. “Today we made two more points than last season, so we are improving and I’m happy for that. A lot of credit to the players in such a complicated season, with all the issues that happened. The belief of the players is incredible.

“Podence? I think he’s doing well, but with all the disruption, I think Daniel suffered with the process of coming inside the team. He’s doing well, I think we have good options in the front three, that give us different characteristics, different solutions for each game.

“After the organisation comes the talent of our play. I think today it was pure talent in the moment of the first goal – the combination was very good. When we score a goal it’s a moment of true happiness. The only thing is Molineux would have been buzzing, we missed them.”