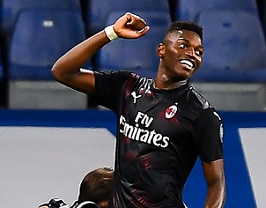 Portuguese striker Rafael Leão came off the bench to score for AC Milan as the Rossoneri beat Sampdoria 4-1 on Wednesday evening to continue their fine form in Serie A.

The victory for Milan ensured they will finish in 6th place and qualify for the Europa League, having embarked on an 11-match unbeaten run in the league, while for youngster Leão it was yet another promising cameo.

The former Sporting man entered the action at half time in place of Ante Rebic with Milan 1-0 up through Zlatan Ibrahimovic’s goal. Zlatan then turned provider for Hakan Calhanoglu before the veteran Swede scored his second to put the visitors three goals ahead, with Samp pulling one back towards the end of normal time through Kristoffer Askildsen.

Leão’s moment came in stoppage time as he struck with a superb right-footed shot from the edge of the area. The goal means Leão has four goals and one assist from his last eight substitute appearances, and such form since football returned continues to be the basis of much hope among Milan fans that the 20-year-old could be one of the stars of next season.