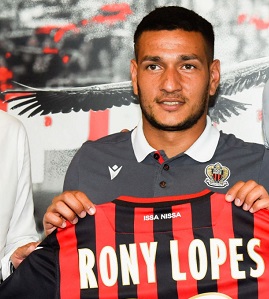 Portugal international Rony Lopes was unveiled by Ligue 1 club Nice on Thursday, after signing a one-year loan deal from Sevilla to move back to French football.

The move back to France, where Lopes has spent most of his career with Lille and Monaco, had an added level of familiarity as Nice coach Patrick Vieira was in charge of Manchester City’s academy when Lopes was with the English club as a teenager. Vieira sat alongside Lopes during the press conference to announce his move to Nice and was clear in his appraisal of the Portuguese.

“He is a passionate player, always the first to arrive and the last to leave in training and who loved spending time on the pitch to give himself the means to succeed,” Vieira said. He has moved a lot and today he is more mature. He must now gain confidence and more experience in a team in which he can demonstrate all his talent. I’m happy to have him here.”

For Lopes, the chance to revive his career after two frustrating years. Having elevated himself to one of the best players in Ligue 1 in the 2017-18 season, during which he scored 15 league goals for Monaco, the Brazilian-born Portugal international struggled with injury the following year ahead of moving to Spain last summer.

“I’m happy to join a club and an ambitious project and a team that always wants to win,” Lopes said. “I know that in Nice the supporters are always behind the team. When we played against them with Monaco, they were always there, thoroughly.

“Sevilla? I keep the positives. It was a good experience for me. Sometimes things work, sometimes they don't. There it didn't work. It's a thing of the past and now I'm focused on Nice and I want to give my all here.”

Rony Lopes was so good at Monaco pic.twitter.com/vH8TtWpKi3

While Vieira admits that Lopes “has some physical work to do in order to reach his best level,” the club are keen to get Lopes up to speed quickly. Having already trained with his new teammates, Lopes is expected to either take part in Saturday’s friendly against FC Dac, or in the following match vs Red Bull Salzburg on 8th August.

Nice begin the new Ligue 1 season with a home match against Lens on 22nd August.

Wow, what a Nice development!

Big fan of his. Hope he is successful at Nice and finds his way into the national team. Go Rony!

Sometimes I really just think it’s best to give up on this guy for the national team. I know he’s “only 25” but in all reality, 25 in the soccer world is already to the point where you should be at your very best. This dude is constantly...

Sometimes I really just think it’s best to give up on this guy for the national team. I know he’s “only 25” but in all reality, 25 in the soccer world is already to the point where you should be at your very best. This dude is constantly switching teams or getting hurt it seems like. Don’t get me wrong here, it’s not a knock against him personally, surely I’d love to be playing for Nice this year lol. I’m just saying that I’m terms of his position being a winger/central midfielder whatever, at 25 years old you better be one of the best players in your league consistently if you want to play for Portugal. Maybe that’s too harsh of me to say but when I think of a 25 year old player in today’s game that really hasn’t done anything, that’s like a 32 year old twenty years ago trying to get a call up. What’s sad is that I actually think that Rony on his day could be better than almost anyone we have too but Jesus when will this dude start actually playing?

Lopetegui was never going to let him.