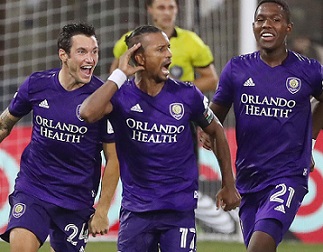 Orlando City pulled off somewhat of an upset in the MLS is back Tournament on Friday evening, beating Los Angeles FC on penalties after a 1-1 draw and booking their place in the final four.

The triumph owed much to Orlando’s Portuguese influence, with youngster João Moutinho and Seleção legend Nani both taking starring roles on the night. Orlando will meet either Minnesota United or San Jose Earthquakes in the semi-final next Friday.

After a goalless first half, Nani had the chance to put Orlando ahead in their home city in Florida from the penalty spot after 57 minutes, but his effort was well-saved by former Ajax goalkeeper Kenneth Vermeer. Orlando then fell behind on the hour when Bradley Wright-Phillips converted from close-range to put favourites Los Angeles ahead.

Orlando looked to be headed for defeat but with just a few minutes of normal time remaining the Portuguese connection levelled the game. Nani’s corner was met by his fellow Sporting academy graduate, 22-year-old defender João Moutinho, who scored his first MLS goal for the club to send the game to penalties. It was Nani’s third assist of the MLS is back Tournament.

Moutinho converted from the spot during the shootout, and fittingly the decisive penalty fell on Nani with Orlando’s 5th kick offering qualification after Los Angeles had missed. This time Nani sent Vermeer the wrong way, leading to jubilant celebrations from the Orlando players as they assured themselves of a place in the last four.