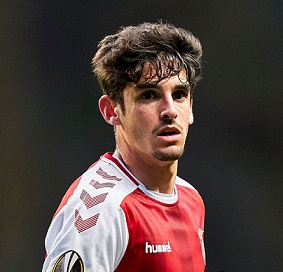 Francisco Trincão was finally unveiled as a Barcelona player on Wednesday at Camp Nou, and the Portuguese youngster emphasised his desire to work hard at his new club.

Trincão signed for Barca in a €31m deal from Sporting Braga in January, with the 20-year-old staying in Portugal for the second half of the season. Having signed a five-year contract in Catalonia, Trincão began pre-season training in his new surroundings earlier this month ahead of today’s official presentation.

“I have come to Barça to work and to become a star at this club” he said. “I am looking forward to starting and I want to win everything for Barcelona. It is the first day and I am very delighted. It is the best club in the world and I hope to help the team with both goals and assists.”

Asked about his best position, Trincão replied: “I'm here to work and be able to do the best I can. I'm going to talk to the coach, to find out what he wants from me, and I feel comfortable playing in any position, in the attack or on the wing. I hope the fans enjoy my football.”

Regrettably, many reporters chose to press the new arrival on the subject of Lionel Messi’s future, but Trincão calmly diffused the subject: “We'll see what happens soon,” he said. “I just focus on what I can do. I haven't spoken to Koeman or Messi yet, but of course I would like Messi to stay because I have him as a reference in football. Suarez leaving? I have been here for two weeks and I want to do my job, play a lot and be a reference in Barcelona. The rest is not for me to comment on.”

Trincão is set to become the 9th Portuguese to play for Barcelona, following on from the likes of Fernando Couto, Deco, Simão Sabrosa and of course Luís Figo. Responding to the Figo comparison in particular, Trincão issued a confidence retort.

“I take inspiration from all my compatriots who have been at this club. But I am here to create my own history. I want to be at the best club in the world, winning everything and being one more member of the team. I promise work and dedication from the very first day.

“All the Portuguese had their history here, but now I want to write mine. Figo? He was very good at this club and I hope I can do even better.”