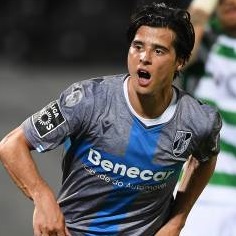 João Carlos Teixeira has left Vitória de Guimarães to sign a two-year contract with Feyenoord, the Dutch club announced on Friday at a press conference.

The 27-year-old midfielder joins the Rotterdam club for an undisclosed fee, with Vitória revealing they maintain a percentage of Teixeira’s rights having cashed in following an impressive season from the former Liverpool and Porto man last term.

“I’m very happy to be here,” Teixeira told the club’s in-house channel. “It’s a beautiful chance for me and I’m very excited to start training and helping the team. Why Feyenoord? It’s a great club with a great history. I already know about the fans. So there was a symphony between me and the club, so it was my choice and I’m happy to be here.

“I know Feyenoord won a Champions League and is a club with a big history. I knew about the fans as well. I spoke with a few people in Portugal that played here and they told me the same thing: they have the greatest fans in Holland, and I’m happy to join.”

Official: Another Portuguese at a big European club as João Carlos Teixeira signs for Dutch giants Feyenoord on a two-year deal from Vitória. pic.twitter.com/KZuLNjRj0X

Asked to describe himself as a player, Teixeira said: “I’m an attacking midfielder. I like to score, I like to assist and that’s what I’ll try to do. But the main thing is to help the team. Yes [I’m fit to play] I was in pre-season for two or three weeks already. I feel great to train and play and do my best for the club.”

Teixeira, who came through the ranks at Sporting as a highly-touted prospect before spells with Liverpool and Porto, becomes the third Portuguese to play for Feyenoord. Defender Edgar Ié was on-loan at the club last season and left-back Bruno Basto spent a year in Rotterdam in 2004-05.

The appointment of Portuguese boss João Carlos Pereira at Grasshopper Zurich has led to an influx of Luso players heading to Switzerland to join the club. Former Académica boss Pereira headed back to Swiss football, where he had previously coached Servette, this summer and has wasted little time in recruiting his countrymen.