“Perfect for me” – Portuguese midfielder Vitinha on “dream” Wolves move 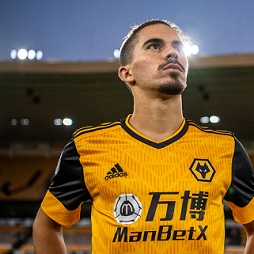 Wolverhampton Wanderers unveiled their latest import from Portugal on Thursday, as midfielder Vitinha was confirmed on a loan deal from FC Porto with a €20m option to buy.

The 20-year-old became Wolves’ second signing from the Dragão in the past week, after forward Fábio Silva arrived at Molineux for €40m on a five-year contract. The double-signing takes the current number of Portuguese at the West Midlands club to ten, while Bruno Jordão recently left for Famalicão on loan.

“I’m very excited,” Vitinha said upon his official unveiling. “I can’t wait to show all Wolves fans, and football fans, what I’m capable of and help the team.

“I think at this point of my career, I’m young and this context is perfect to me. This club, this project and to play in the best league in the world, it’s a dream come true. It looks like a cliché, but it really is a dream and I can’t wait to start.

“I don’t like to talk much about me, I prefer to show, but I’m a talented player with a lot of technique and in other things I don’t quit. I’m very resilient and at the very first opportunity I have, I will show all my potential.”

Vitinha could be the daftar idn poker in a very Portuguese pack, with the player touted for a big future in Portugal before his surprise move to the English Premier League.

The deal to take Vitinha to England is believed to have frustrated Sergio Conceição, with A Bola reporting that the Porto boss was expecting to implement the youngster into his side further during the upcoming season after his introduction in January. Nevertheless, the move represents an opportunity for Vitinha to venture abroad in what is a hospitable setting for Portuguese.

“I know that here in Wolves there are a lot of Portuguese people and I’m excited,” he said. “I can’t wait to talk to them and to join them.

“I have two references, they are Moutinho and Ruben Neves, and I can’t wait to learn a lot from them, it’s a pleasure.

“To all Wolves fans, I’m just here to say that I’m one more to help the team and once I have opportunities, I will show all my potential and give my best, that you can count on.”