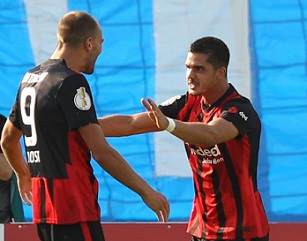 André Silva picked up where he left off at the end of last season with a goal and an assist for Eintracht Frankfurt in their 2-1 win over 1860 Munich in the German Cup on Saturday.

The Portuguese striker, who finished last season in fine goalscoring form, scored the opener and then set up another for strike partner Bas Dost, as Frankfurt made a winning start to the new campaign.

The match in the first round of the DFB Pokal came just days after Silva committed to the club on a three-year contract. Silva joined Frankfurt last summer on a two-year loan deal from AC Milan, but the clubs reached an agreement to make the transfer permanent and the 24-year-old took to the field this weekend with his future resolved.

After a goalless first half, Silva headed the visitors in front from close range five minutes after the re-start following nice set-up from Dost. The Seleção man then turned provider former Sporting man Dost with a perfect cross for the Dutchman to make it 2-0 in the 56th minute, with Phillipp Steinhart’s late penalty a mere consolation.

Speaking after the match, Dost admitted the pair need time to grow what appears a promising partnership. “[It’s] correct [we worked well together]  but that also has to do with the fact that we are fit. You can get an understanding, but when one gets injured it becomes difficult again.

“It is therefore important that you play together over a longer period of time, then the automatisms come by themselves. You could see that in Munich, but we still have room for improvement. However, if this continues, I am convinced that we can score a lot.”

Gonçalo Paciência was an unused substitute for Frankfurt, who begin their Bundesliga season with a home match against Arminia Bielefeld next weekend.

Imagine if Bas was Ronaldo? I think they should be up front together