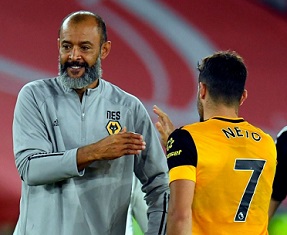 Nuno signed a new three-year contract with Wolves before the weekend ahead of what appeared a tough opening Premier League fixture at Bramall Lane. However, the visitors were two goals up after a little over five minutes, with Nuno’s Portuguese contingent inevitably at the heart of the action.

There were two new Portuguese additions to the squad for the match, as arrivals from Porto Vitinha and Fábio Silva took their places on the Wolves bench alongside Diogo Jota, Rúben Vinagre and Rúben Neves. With Rui Patrício, João Moutinho, Daniel Podence and Pedro Neto all starting, the total of Portuguese in the matchday squad reached a remarkable nine players.

Winger Podence was the creator for the opening goal with a superb run down the left before his cross was expertly dispatched by former Benfica striker Raul Jimenez in the 2nd minute. Just a few minutes later the lead was doubled when Pedro Neto’s corner found Romain Saiss, who headed past Sheffield United goalkeeper Aaron Ramsdale.

The second goal proved the last of the scoring, but the closing stages were notable for Vitinha making his debut in English football as an 86th-minute substitute in place of Moutinho. Neves also joined the action in place of Podence but youngster Silva was not called, with Nuno displaying a degree of patience with the 18-year-old.

Speaking after the match, Nuno admitted that his team’s fast start was very much a considered and deliberate tactic. “We knew. It’s clear that Sheffield United would start fast and the message was let’s start faster than them. We saw our energy, what we have, and we dealt with it.

“The ideal was clear to start fast. We were effective, the first two times we arrived at their box, we scored, and that makes a lot of difference.

“The hard work of the boys. It’s the first official match we’ve had, and everyone was waiting for the response of the players and that’s what pleased me most – the way they worked for the ball.

The dream of playing in the Premier League became real 🤩
Thank you Wolves for believing in me🤞🏻
Great victory today lads 💪🏼
Wolves ay we! 🧡🐺#WWFC #Vitinha20 @Wolves pic.twitter.com/9e3ZNUlC5Z

“Tough moments, here it’s always hard. Sheffield United are a fantastic team, they nailed us in the box, created a lot of problems, but we stayed in the game, so I’m happy for it.

“[It’s credit] to the players because they are the ones that prepared themselves well. Those that stayed here during the holidays, with a responsibility to stay fit, and some with the national teams, then presented and worked hard today. We played very good.”

Nuno added that he still hopes to strengthen his squad further, as Wolves prepare for a midweek League Cup tie at home against Stoke City before hosting Manchester City at the weekend.

Thanks for the Wolves updates. I watch every game. Fantastic team to follow