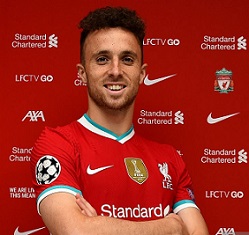 Diogo Jota has completed his move from Wolverhampton Wanderers to Premier League champions Liverpool on a long-term deal for a fee in the region of €50m.

Jota, 23, leaves Wolves after three seasons at Molineux during which time he scored 44 goals in 131 appearances. The former Paços de Ferreira and Porto forward was unveiled by Liverpool on Saturday afternoon, and spoke to the club’s in-house media about his big move.

“It’s just a really exciting moment for me and my family,” Jota said. “All of my path since I was a kid and now, to join a club like Liverpool – the world champions – is just unbelievable. I just want to get started.

“It is one of the best teams in the world – the best at the moment because they are world champions. When you look at the Premier League, you always see Liverpool as one of the biggest teams in the country, so it’s impossible to say no. So we just want to come [here], to give our best and hopefully I can become a good option for Liverpool in the future.

“I have played two years in the Premier League now with Wolverhampton [Wanderers] so now I just feel like it is a good moment to come here, to play Champions League again. It is massive for me but I think I am ready for this new chapter.”

Liverpool boss Jurgen Klopp was asked why he sought to bring Jota to the club and in replying admitted a wider appreciation for the current crop of Portuguese players. “Oh my god, plenty of reasons!” Klopp said. “He’s a player who gives us so many options to use him. He’s 23 years old, still far away from being kind of a finished article, so much potential.

“He has the speed, he can combine, can defend, can press. It makes it just more unpredictable and gives us real options for different systems because he can play pretty much all three positions up front in a 4-3-3, if we play with four midfielders he can play both wings. So, these kinds of things. It’s just nice. And he has some natural things which we have in our game, like this desire and the greed and the direction.

“He is part of this unbelievable Portuguese generation in the moment, where they have really a lot of obviously quite skilled players. We saw the Portuguese team last time, it’s quite impressive. So, I’m really happy to have him here. And on top of that, a really good guy and really happy to be here.”