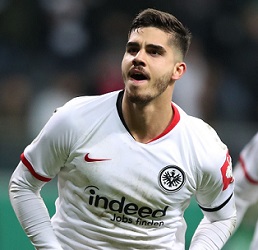 André Silva has picked up where he left off in the Bundesliga after scoring for Eintracht Frankfurt on the opening round of the new season in their 1-1 draw with Arminia Bielefeld.

Silva struck the equaliser just after the hour mark, following up his goal in the DFB Pokal last week to make it two goals from two games in all competitions at this early stage of the campaign.

The Portuguese was assisted for the goal by strike partner Bas Dost, who spoke to the press after the final whistle. “Overall, we could have done more, so we're disappointed. But we saw a lot of good things. The combination with Silva works well. We have to ask that of ourselves, that we are always dangerous. André struck again, that was good.”

Elsewhere in the Bundesliga, recent departee from Frankfurt Gonçalo Paciência made his debut for Schalke on Friday evening, but it was a nightmarish start for the striker as, with their new arrival in the line-up, Schalke were beaten 8-0 by the European champions. Raphael Guerreiro missed Borussia Dortmund’s 3-0 win over Gladbach with a muscle strain.