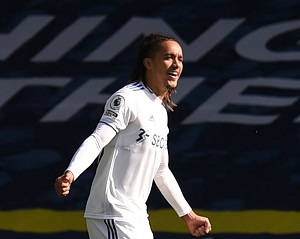 The first Portuguese goals of the new Premier League season were provided by Hélder Costa this weekend, as the former Benfica winger scored twice in Leeds United’s entertaining victory against Fulham.

Costa, who managed just three goals from 40 appearances in the Championship last year, has made a strong start to the new campaign for Marcelo Bielsa’s side as Leeds prove one of the most attractive sides in the early stages of the season.

The Seleção international scored the first and last goals for his side, putting Leeds ahead with a vicious left-footed finish after less than five minutes and later finishing off a swift counter-attack with a precise finish into the top corner. Ivan Cavaleiro was in the visiting Fulham side and played the full ninety minutes.

Elsewhere in England on Saturday, a disastrous start for Bruno Fernandes and Manchester United as they went down 3-1 at home to Crystal Palace at Old Trafford. The Portugal midfielder was largely ineffective in what was massively underwhelming performance from the Red Devils, who had just a month between their final game of last season and the Palace defeat.