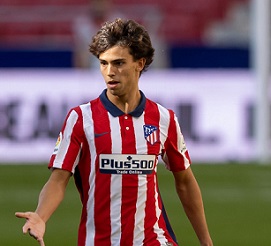 João Félix marked his first appearance of the new La Liga season with a superb performance as Atletico Madrid got off to a winning start with a 6-1 victory over Granada.

Portuguese forward Félix registered a goal and an assist, as well as several other notable moments as Los Rojiblancos gave an encouraging indication of their potential in Spain this season with new signing Luis Suarez scoring a debut brace.

Atletico were dominant from the start and took the lead after less than ten minutes through Diego Costa, before Portuguese on both sides took centre stage. Félix gave Atletico the opportunity to double their lead in the 15th minute when his neat turn drew a foul from compatriot Domingos Duarte, but the subsequent penalty taken by Saul Niguez was saved by Granada’s Portuguese goalkeeper Rui Silva.

The match remained 1-0 until the early moments of the second half when Félix created Atletico’s second of the afternoon. The former Benfica man’s deft ball to the back post found Argentine Angel Correa, who controlled and found the bottom corner with a smart finish.

Félix was in confident mood and midway through the second period he opened his account for the season. Correa’s pass found Félix inside the Granada box and the 20-year-old beautifully worked the ball onto his right foot before slotting past Rui Silva to put Atletico 3-0 up and render the match out of reach for the visitors.

Suarez, a recent arrival from Barcelona, ensured a memorable evening for Diego Simeone’s men by coming off the bench and laying on the fourth goal for Marcos Llorente before scoring twice himself. Jorge Molina’s goal was of little consolation for the visitors, who withdrew defender Duarte during the closing stages.

After the match, Seleção star Félix was asked by reporters if he felt this was going to be ‘his season’ after last year’s settling in following his move from Benfica. “I’m working just as I did last year,” he said. “I’m doing things the way I should, enjoying myself to the fullest and that’s how I’m happy being.

“Do I feel liberated? No, things have just gone well and we played a good game. We must continue like this. We’re happy with the result and the six goals. We’ll take it game by game and not think far ahead.

“Suarez? The better players we have the better it is for us to compete and improve. The arrival of Suarez is very good for the team, for the club and will make everyone happy. Yes [I like him as an attack partner].”