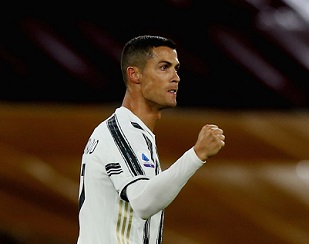 Cristiano Ronaldo made it three goals from his opening two matches of the new Serie A season as champions Juventus twice came from behind to earn a point at Paulo Fonseca’s Roma.

Ronaldo’s second equaliser – a vintage towering header – came after the Bianconeri had gone down to ten men following Adrien Rabiot’s dismissal for a second yellow card. For Fonseca’s Roma, an encouraging showing after recent speculation surrounding the Portuguese coach’s future in the capital.

Roma took the lead through Jordan Veretout’s penalty after half an hour, before Ronaldo equalised from the spot having forced a handball from Lorenzo Pellegrini. However, Roma instantly re-took the lead through Veretout after a superb counter attack on the stroke of half time, and Rabiot’s dismissal on 62 minutes left the visitors with a tough task to earn a result at the Stadio Olimpico.

For Ronaldo, a challenge readily accepted and the 35-year-old Seleção talisman had his team back level five minutes after they went down to ten men. Ronaldo met a cross from ex Porto full-back Danilo with a trademark towering header from five yards out for his 55th goal in 66 Serie A matches.

"This could prove important" - Ronaldo

“I think it is a point earned,” Ronaldo told SKY Italia after the match. “It had become a complicated situation, we got back into it, even after the red card, so by the end of the campaign this could prove to be an important point.

“We’re at the start of the season, there’s a new coach, new ideas, but I see the team working well, enthusiastic and I see a bright future for us. What we’re seeing is that the team is happy to work with a smile.”

Fonseca, meanwhile, was less happy: “I think we had a good game, but I am not satisfied with the result. We created chances and played to win the match. [I didn’t use all my substitutions] because I felt the team was always comfortable, we didn’t allow Juve any real chances and were solid defensively.