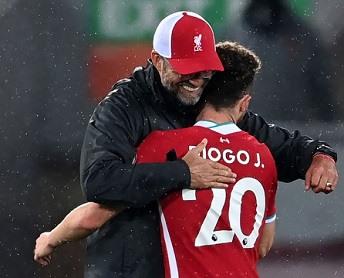 Diogo Jota marked his Premier League debut for Liverpool with the clinching goal as the champions beat Arsenal 3-1 at Anfield to take an ominous early advantage over their title rivals.

Portugal forward Jota, who arrived from Wolves earlier this month in a deal worth up to €50m, came on for the final ten minutes after goals from Andrew Robertson and Sadio Mane had seen Liverpool come from behind to lead 2-1 after Andre Lacazette’s early opener for Arsenal.

Jota looked lively before scoring in the 88th minute with a precise low right-foot shot from the edge of the area, and speaking after the match Reds boss Jurgen Klopp spoke about the former Porto man’s integration at Anfield over recent days leading up to the game.

“I’m really pleased for Diogo Jota,” Klopp said. “Top, top guy. It’s so difficult to improve a team like ours. He’s been on my list for two or three years, he’s here now.”

“Diogo came on, played his natural football, tried to defend the way we defend. He is on 20 per cent of information on what we do exactly; we had meetings to talk about it and that will all take time.”

Jota, who is the sixth Portuguese to play for Liverpool, became the fourth to score in a competitive match for the Reds, following on from Abel Xavier, Raul Meireles and recent Feyenoord arrival João Carlos Teixeira.

🗣 "It's an amazing feeling, I just wish it could be in a full stadium"