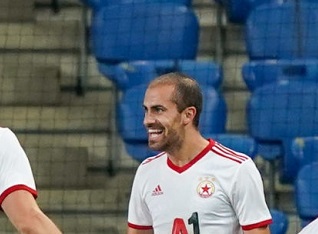 The Europa League group phase line-up was completed on Thursday night with the final qualifying round taking place throughout the evening, and while the night proved a disheartening one for Sporting and Rio Ave, there were multiple positive stories involving Portugal’s foreign-based contingent.

Four ties were influenced hugely by Portuguese goals, while José Mourinho’s Tottenham Hotspur booked their place in the next stage with a resounding 7-2 win over Maccabi Haifa in London. Of the 19 ties not contested by Portuguese clubs, 12 involved a Luso representative in the matchday squads or on the coaches’ bench, and the outcomes were largely favourable.

With Benfica and Braga in the group phase of the competition, a whole raft of other Portuguese protagonists will be hoping for as much luck as when playing Situs Poker Online when it comes to tomorrow’s draw, thanks to several sparkling individual performances from the Luso legion abroad.

Perhaps the most stark and decisive contribution made on the night came in Switzerland as Bulgarians CSKA Sofia came from behind to eliminate Basel at St Jakob-Park. The catalyst for the comeback was CSKA's Portuguese playmaker Tiago Rodrigues, who entered proceedings just before the hour mark after his team had gone 1-0 down to a 54th-minute penalty, and turned the game around with a brace.

Former Marítimo and Nacional midfielder Tiago levelled things up in the 72nd minute with a superb individual run and powerful shot from just outside the penalty area to cancel out Basel’s lead. The tie looked to be edging towards extra time, but in the 88th minute Tiago hit a thumping free-kick from almost 20 yards which cannoned off the Basel wall and flew past helpless goalkeeper Dorde Nikolic.

Phenomenal impact by Portuguese midfielder Tiago Rodrigues for CSKA Sofia last night at Basel. Tiago came on with CSKA 1-0 down and scored twice to inspire a shock 3-1 win at St Jakob-Park pic.twitter.com/pmqcRprMKB

Tiago, 28, has become a key member of the CSKA team over the last three years since joining the club, but his double from the bench represents his greatest performance in continental competition. Having risen through the ranks at Vitória de Guimarães before joining Porto, Tiago had only scored two goals in European competition before the tie with Basel, with both coming during his time with CSKA.

Greeks AEK Athens also staged an impressive comeback to overturn a first-half deficit against Germans Wolfsburg in the capital. AEK missed an early penalty through Petros Mantalos, before Admir Mehmedi gave the Bundesliga team an ominous lead on the stroke of half time to leave AEK with a tough task in the second period.

It would be Portuguese midfielder André Simões to draw the hosts level on 64 minutes and the former Santa Clara and Moreirense midfielder did so in sensational fashion. Simões received the ball over 25 yards out and unleashed a superb first-time shot with his right foot which flew past Pavao Pervan into the top corner.

André Simões really came through for AEK Athens last night. This golaço turned the game as the Greeks came from behind to beat Wolfsburg 2-1 in the Europa Leaguepic.twitter.com/N9gsNHwZIN

AEK, who also had striker Nélson Oliveira in their line-up, won the tie in dramatic fashion through substitute Karim Ansarifard’s 94th-minute winner to send them into Friday’s group-phase draw.

Azerbaijan side Qarabag secured their place in the group phase with a surprisingly emphatic win away against Legia Warsaw in Poland. Qarabag, who have been growing in experience at continental level in recent years, scored three second half goals to complete a rare away victory in the competition against the Ekstraklasa champions.

Key to the triumph was recently-acquired Portuguese midfielder Patrick Andrade, who scored the opener and provided an assist for the third on what was just his 4th appearance for the club. Andrade joined Qarabag from Bulgarian side Cherno More towards the end of this summer, having previously played for Famalicão in his homeland.

Six years ago Patrick Andrade was playing for Joane in the 4th tier in Portugal. Last night he was the inspiration for Qarabag to win 3-0 at Legia Warsaw in the Europa League

Andrade is from Cape Verde and Nani would certainly approve of the celebration pic.twitter.com/LkWyGwh7Si

Also decisive in seeing his team through was former Porto midfielder Josué, whose penalty was the only goal of the game as Hapoel Be’er Sheva advanced 1-0 at the expense of Czechs Viktoria Plzen in Israel. Ex-Benfica defender Miguel Vitor was also in the Hapoel side.

Elsewhere Mário Camora, who was recently called up to the Romanian national side after gaining citizenship, captained CFR Cluj to a 3-1 win over Finnish side Kups, with former Belenenses defender Nuno Tomás featuring for the visitors. Also comfortably through are PSV, who won 2-0 at Rosenborg with Bruma an unused substitute.

La Liga outfit Granada are through thanks to a 3-1 win over Malmo in Sweden, with Rui Silva in goal and Domingos Duarte in the backline. There was further good news for Lech Poznan and influential midfielder Pedro Tiba as they advanced with a 2-1 victory at Belgians Charleroi, while defender João Escoval was a late introduction to help Croatia’s Rijeka see out a narrow 1-0 triumph at Copenhagen.

In less fortunate outcomes, Cypriots APOEL had Portuguese trio Miguel Silva, Geraldes and Artur Jorge in their line-up for a 1-0 loss to Slovan Liberec, while former Famalicão defender Ângelo was part of a brave Ararat-Armenia side who were edged out 2-1 at home by strong favourites Red Star Belgrade.

The biggest Portuguese name involved on the night and the only manager taking part was José Mourinho, who watched his Tottenham Hotspur hammer Israelis Maccabi Haifa. Star striker Harry Kane netted a hat-trick, while there was a double for midfielder Giovanni Lo Celso and further goals scored by Dele Ali and Lucas Moura.

Spurs play Manchester United at the weekend and the scoreline will boost confidence ahead of the clash, although Mourinho was keen to avoid getting carried away when analysing the match with reporters after the final whistle.

🗣️ Jose: "We were just clinical. We hurt them many, many times in transition. Job done." #THFC ⚪️ #COYS pic.twitter.com/Ks0O49f1Pl