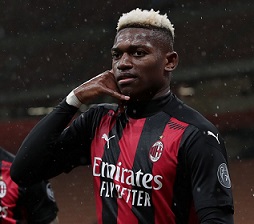 Sunday was a lively day for Portuguese goalscorers this week, with some of the brightest Luso youngsters making an impact in the major leagues across Europe.

Rafael Leão steals the show with a first-ever brace for AC Milan in Serie A, while Renato Sanches also found the net and Pedro Neto scored the winning goal for Wolverhampton Wanderers in England. Bruno Fernandes was also on the scoresheet, but his early penalty came in a devastating 6-1 loss for Manchester United against José Mourinho’s Tottenham Hotspur at Old Trafford.

Rafael Leão scored twice for AC Milan at San Siro against Spezia on Sunday as the Rossoneri ran out 3-0 winners to maintain their 100% record so far in Serie A.

Leão’s brace was the first double of his professional career and two poacher’s goals marked his return to the line-up after recently battling covid-19. The 20-year-old scored the vital opener for Milan on 57 minutes before later putting the seal on the victory, with both goals coming after he was moved into a centre-forward position.

Leão was deployed on the left of Milan’s attack initially, and after speaking about his goals the former Sporting man addressed the issue of his best position. “I am happy for the team, also pleased for myself to score two goals, it was a very intense match,” he said. “After the lockdown, we had great performances and results, so we want to continue like this towards our objective.

“I always try to help my team in any role the coach places me, whether that’s wide or as a centre-forward. I like to play wide, as there’s space to go one-on-one with defenders. As a striker, I am closer to the goal and have a better chance of scoring.

“I feel the coach and my teammates have faith in me, I felt that again today, I am grateful to have started the game.”

Renato Sanches also scored his first goal of the season in Ligue 1 as Lille swept aside Strasbourg 3-0 on Sunday afternoon. The former Benfica man, who missed around a month of football recently through injury, doubled his side’s advantage at the second attempt early in the second half and was praised by his coach Christophe Galtier after the match.

“Renato had started the season against Rennes, then he got injured,” Galtier said. “He was out for 15-20 days. Renato is an “animal” on the pitch. But for him to be able to express himself in that way, he must be very good physically.

“I am very satisfied with his performance. We know his qualities and I am not surprised.”

Club captain José Fonte and midfielder Xeka were also involved for Lille, who had Tiago Djalò on the bench. “It feels good and we worked hard for the win because we had some difficulties in the first half which we fixed at half time and won 3-0,” Xeka told the club’s official website.

José Mourinho returned to former club Manchester United on Sunday afternoon and the Portuguese boss could scarcely have asked for a more positive outcome as his Tottenham Hotspur hammered the Red Devils 6-1 in the Premier League.

Bruno Fernandes put United ahead from the penalty spot after a rash challenge on Anthony Martial saw United issued a spot kick inside the first minute. However, Spurs hit back to equalise immediately through Tanguy Ndombele, before taking the lead when Hueng-Min Son struck on 7 minutes.

Martial was sent off for a raised hand towards Erik Lamela and Harry Kane put Spurs 3-1 up to cap an incredible opening half hour. Son scored his second to send Mourinho’s side into the break 4-1 up and further goals from Serge Aurier (51’) and Kane (79’) gave Spurs a memorable victory for their Portuguese boss to relish.

“It was an amazing performance,” said Mourinho. “I can imagine some anti-Spurs people will say it was 11 against 10 for the second half, but I have to say we were so much better than them for the whole of the first half, 11 against 11, lots of confidence in the team, losing 1-0 to a silly penalty, no problem.

“So, an amazing performance, an historic result and very important three points, because with these three points, we go up in the table.”

Pedro Neto scored his first Premier League goal at Molineux to give Wolverhampton Wanderers a 1-0 win over Fulham, ensuring Nuno Espírito Santo’s side got back to winning ways after three straight defeats.

Neto settled the match against Fulham with a well-taken strike on his favoured left foot ten minutes into the second half. Wolves also had Rui Patrício, Nélson Semedo, Rúben Neves and Daniel Podence in their starting line-up, while João Moutinho was a second-half introduction.

“It was very good to score a goal, to help the team take the three points. It was important for us, so I’m very happy,” Neto told the club’s media

“It was very important, we came from the defeat against City and then West Ham, so we knew we needed to improve, to change our minds to go forward, so today we worked harder than the other days.

“It shows the character of the squad because we came from the defeat, but we know that we have to work hard, and work as much as we can, because we knew this game would be very important to get the win. It was a must-win game.

“We showed today the mentality of this team.”

The rest: Rodrigues winner in Spain

There was a memorable moment for Portugal international left-back Kevin Rodrigues in La Liga this weekend as his late winner gave Eibar a 2-1 win over Real Valladolid on Saturday. Rodrigues, who moved to Eibar on loan from Real Sociedad ahead of this season, won three caps for the Seleção in 2017.

Elsewhere, Tiago Rodrigues followed up his remarkable showing for CSKA Sofia in the Europa League with a goal to engineer another comeback for a 2-2 draw at Etar in Bulgaria. In the same league, Dinis Almeida scored for Lokomotiv Plovdiv in a 3-1 win over Beroe, while João Nunes put Puskas FC ahead at champions Ferencvaros in Hungary, but his side went on succumb to a 2-1 defeat.

Finally in Cyprus, former Belenenses forward Kika inspired a stunning comeback from 3-0 down with Doxa in their draw with Karmiotissa. Substitute Kika pulled a goal back for his side on 69 minutes, before Doxa scored twice in the dying minutes – including the Portuguese adding his second for the all-important equaliser in the 93rd minute.