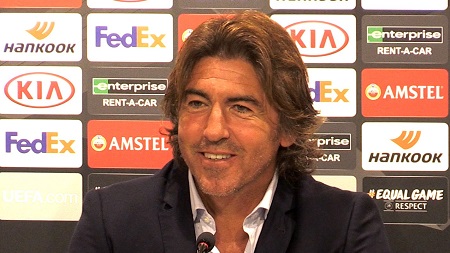 Ricardo Sá Pinto has been announced as new coach of Brazilian club Vasco da Gama on a short-term contract until the end of the current Brasileirão championship.

Sá Pinto, 48, has been without a club since leaving Braga in his homeland shortly before Christmas last year, and was recently thought to be on the verge of taking the reigns at Greek giants Panathinaikos.

However, talks with Pana broke down after an approach from Vasco, with Sá Pinto’s agent confirming that his client’s head was turned by the chance of heading to Rio de Janeiro to continue his career.

Vasco started the current campaign in excellent form but a slump in results has seen Almirante slip down to 10th place on a run of five matches without a win. A 3-0 defeat at Bahia earlier this month cost Ramón Menezes his job, before assistant Alexandre Grasseli stepped in for the most recent match, which saw Vasco beaten 2-1 by Flamengo.

Sá Pinto will bring his own staff to the Estádio São Januário on a contract essentially lasting four months as things stand. The Campeonato Brasileiro usually runs until December but delays caused by the global pandemic mean the remaining 24 matches with stretch until the end of February, with little let-up around Christmas as Vasco travel to play Athletico Paranaense on 27th December.

Although Sá Pinto arrives in Brazil this week, he will not be in charge of Sunday’s clash with Internacional, with Grasseli continuing to manage the team in Porto Alegre.

Vasco has little tradition of foreign coaches, with the club’s only two non-Brazilian managers being their first as a professional club: Englishman Henry Welfare and Uruguayan Ondino Vieira. On the playing side, former Sporting and Portugal winger Fernando Peres spent a brief period with Vasco in 1974, while another former Alvalade man, José Dominguez, ended his career with the club in 2005.