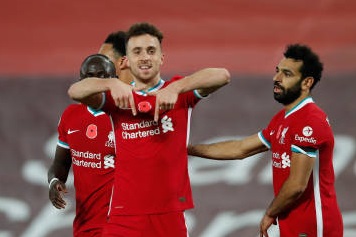 Diogo Jota continues to shine with new club Liverpool after coming off the bench to score a vital winning goal against West Ham United at Anfield.

The Portuguese forward entered the action on 70 minutes with the score level at 1-1 and initially saw a goal disallowed by VAR, before later snatching all three points for Liverpool with just five minutes left on the clock with a calm finish.

“It means a lot, of course,” Jota said after scoring for the third successive game. “I was on the bench seeing the game and thinking what I could do different to unlock the result. Fortunately, I did two goals, just one counted but in the end we got the victory. The most important [thing] was the win and we just want to keep winning games.

“What did the manager ask of me? To be lively. Of course, with the game time the other team gets tired, so we need to make movements. Fortunately, in the end I got the space, a great pass from Shaq and I could score.”

"Yes, Diogo, is in a good moment! He's a good player and we're really happy we could make that signing. So it's a proper win-win situation. I think we can help him and he can help us a lot." - Jurgen Klopp pic.twitter.com/iWoOYxUt7v

The win saw Liverpool move above local rivals Everton into 1st place in the Premier League, although the champions have played one match more than the Toffees.