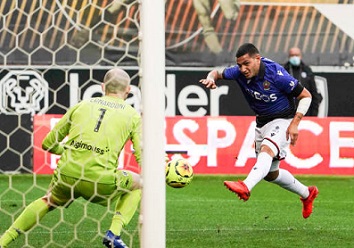 Cristiano Ronaldo, André Silva, Diogo Jota and João Félix were the biggest names on the scoresheet over he weekend, but as usual there were many Portuguese finding the net in leagues across the continent and beyond.

Rony Lopes and Gelson Martins both scored for the first time in Ligue 1 this season during Sunday afternoon’s action in France, while Daniel Candeias has hit form in Turkey where he scored a stunning volley for Genclerbirligi and Rúben Vezo’s equaliser gave Levante a point in Spain’s Liga.

Seleção midfielder Lopes scored the opener for Nice in their 3-0 win at Angers on Sunday, getting his first goal since February 2019 when playing for Monaco. The 24-year-old finished superbly on his left foot from a tight angle on 12 minutes, and further goals from Pierre Lees Melou and Hichem Boudaoui helped the visitors to a comfortable win to move into 4th place.

Nice boss Patrick Vieira was asked about Lopes during the post-match press conference. “Rony Lopes arrived from Seville, where he didn’t play much, but when you see the work he puts in on a daily basis, we know that it will come for him,” Vieira said.

“Everyone is behind him and today he put in an excellent performance and scored a goal, which will set him on his way. Competition will start to take shape in the squad and that’s a good thing to raise the level of the squad.”

Gelson off the mark

Another Portuguese looking to get his career back on track in France is Gelson Martins. The former Sporting man has endured a turbulent year after receiving a lengthy suspension in February for a confrontation with a referee, and Sunday’s 4-0 win over Bordeaux brought a welcome return to the scoresheet as well as an assist.

Gelson arrived at the back post to convert Ruben Aguilar’s cross after half an hour to put Monaco 2-0 up, and it was the Portugal man’s first goal since scoring against Paris Saint-Germain in January. Monaco’s fourth goal saw Gelson turn provider with a superb left-footed cross for Kevin Volland, earning the Seleção forward the Man of the Match award according to statistical website WhoScored. 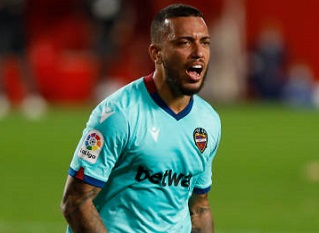 Rúben Vezo also scored his first goal of the season and was rated the best player on the pitch as Levante drew 1-1 against ten-man Granada in La Liga. Vezo’s header on 34 minutes drew Levante level, but the visitors ultimately left disappointed not to have taken all three points after playing against ten men from the 16th minute when Granada’s Maxim Gonalos was sent off

“The truth is that it was a good goal, a shame that it did not help the team win,” Vezo said after the match. “We tried everything, but it was not possible. The team has done well, we created a lot of chances but we missed them. But we’ve given a good display and we went for the game.”

The rest: Candeias brilliance in Turkey

Daniel Candeias scored for the second time in three matches for Genclerbirligi in Turkey with a stunning strike in their 1-1 draw with Gaziantep in the Super Lig. The winger connected with a superb right-foot volley from a cross to pick out the far corner for an equaliser on 56 minutes in the Turkish capital Ankara.

What a finish by Daniel Candeias for Gençlerbirliği in Turkey earlier today pic.twitter.com/RI9EgvVjpM

Elsewhere, the Portuguese goals spread to North Africa where former Arouca and Liverpool forward Toni Gomes came off the bench to score a late winner in Egypt. Gomes was thrown on after 63 minutes for Haras El Hodood as they were being held 1-1 at El Gouna, and the 21-year-old scored an 84th-minute winner for Haras. Finally, in Greece former Belenenses striker Sturgeon gave OFI the lead at AEK Athens but the visitors fell to a 2-1 defeat in the capital.