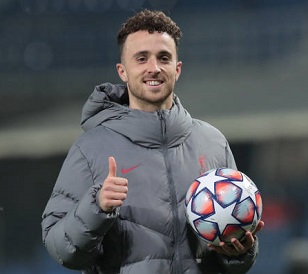 Just another evening in the Champions League as Portuguese players stole the headlines yet again across the continent in Europe’s premier club competition on Tuesday night.

Diogo Jota was the star performer with a hat-trick in Liverpool’s astonishing 5-0 win over Atalanta in Italy, while there was another glittering display from João Félix with Atletico Madrid in Russia and João Cancelo put the seal on Manchester City’s win over Olympiacos with a superb strike. There was also, however, a devastating home defeat for Luis Castro’s Shakhtar Donetsk against Gladbach.

Former Porto man Jota enjoyed the best night of an already fruitful young Liverpool career as his treble inspired the English champions to a surprisingly emphatic 5-0 win at last season’s quarter finalists Atalanta. A delicate chipped finish over goalkeeper Marco Sportiello gave Liverpool the lead on 16 minutes, before a beautiful take-down and right-footed shot doubled the Reds’ advantage after 33 minutes of play.

Mohammed Salah and Sadio Mane added further goals to give Liverpool a commanding 4-0 scoreline early in the second half, leaving Jota to round off the scoring less than ten minutes after the re-start when latching onto Mane’s exquisite throughball and rounding Sportiello for a simple finish.

Asked after the match if it was the best performance of his career, Jota replied: “Well I’m playing in the best team in my career so far, that’s for sure. I don’t know if it was my best moment, but obviously scoring goals is my way of playing football so I’m really happy with this and the result, of course. A great win away in the Champions League, so good moment, good night.

“Favourite goal of the three? The first one, just because it unlocks the game. I think for all the teams it’s important to get the first one in each game, we scored soon in the game so it was a good moment for me and for the team because after that we could manage the game our way. That was the most important.” 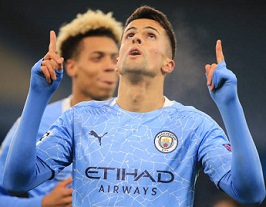 João Cancelo scored his second-ever Manchester City goal and his first of the season shortly after coming on to cap a 3-0 win over Pedro Martins’ Olympiacos at the Etihad Stadium. Cancelo, who was introduced along with Bernardo Silva on 82 minutes, scored with thirty seconds of normal time left on the clock, playing a neat one-two with youngster Felix Nmecha before finding the bottom corner with a left-footed shot from twenty yards. Rúben Dias was rested by City boss Pep Guardiola; José Sá and Rúben Semedo started for the Greek side, who also brought on Bruma and Pêpê Rodrigues.

Atletico Madrid were held to a 1-1 draw in Russia by Lokomotiv Moscow in an early kick-off, but João Félix offered more evidence of his improved form with some fine moments during the match. Indeed, following the final whistle local newspaper AS noted “the 1-1 is not important, seeing João Félix like this is important,” while drawing attention to one of the Portuguese’s many highlights. Eder was an unused substitute for Lokomotiv.

The night’s other early kick-off saw Shakhtar Donetsk host Germans Borussia Monchengladbach in Ukraine, looking to follow up a respectable four points from their previous two matches against Real Madrid and Internazionale. However, Luís Castro's Shakhtar suffered the heaviest home defeat in their European history, losing 6-0 in Kiev.

“We feel completely humiliated,” Castro said after the match. “In the first half we didn’t even make a foul. There was not enough aggression and we were impotent in defence. It hurts because this is so unexpected. It’s the same line-up that played against Real Madrid and did well in attack and defence. But football has taught me that if negative things can happen suddenly, so can positive things. We need to look forwards.”

Jota is a young Luis Suarez without the Vampirism, diving and delusional persona. Remember that Liverpool Suarez? Reminds me alot of him.

The Wolves experiment also has been great for Jota and many Portuguese footballers.