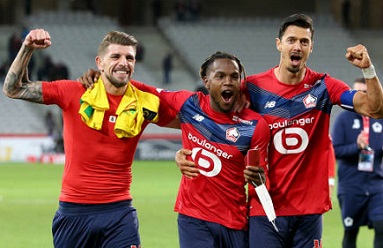 Lille recorded the result of the evening in the Europa League on Thursday night with a superb 3-0 victory over Milan at San Siro. The encounter featured numerous Portuguese players, but Renato Sanches was the standout Luso performer with a dominating display in midfield for the Ligue 1 side.

Elsewhere it was a good evening for Portuguese bosses as Paulo Fonseca’s Roma hammered Romanians CFR Cluj in the Italian capital, while José Mourinho’s Tottenham Hotspur recovered from last week’ surprise defeat to Antwerp with a 3-1 win over Bulgarian champions Ludogorets.

Lille’s clash with Milan in Italy saw a total of six Portuguese named across the two matchday squads. Diogo Dalot started at right-back for Milan, who called Rafael Leão from the bench for the second half; Lille selected Jose Fonte, Xeka and Renato Sanches in their line-up and kept Tiago Djalò in reserve. Leão and Djalò were facing their former clubs, having been involved in a part exchange deal last summer.

The star of the show for Lille with a hat-trick was young Turkish international Yusuf Yazici, but Renato Sanches earned many plaudits for his dynamic performance in midfield. He topped the Lille stats for passes made, tackles made, dribbles as well as pass completion, with his 93.3% rate exceeded by Milan’s Franck Kessie overall.

“Renato can have great career” - Fonte

“We are super happy,” Lille captain and Portugal veteran José Fonte said after the match. “We showed character and personality. We played as a team. It’s an important victory. The dressing room? Obviously the atmosphere is great. Of course we’re a little excited but it’s up to us experienced players to keep the feet on the ground. There are a lot of points left to play for.

“Renato? He was huge. He has shown he can play at this level and even higher in the biggest clubs. We know him. We must continue to help him. I believe he can have a very very great career at the highest level. With Lille and with another great team. But when you have the opportunity to have him in your ranks, you have to take advantage of it.”

Milan’s Dalot meanwhile told Italian reporters: “We are disappointed, we started well in possession and could’ve been a little more concentrated on the ball, but we made mistakes that we don’t usually make. The scoreline is too heavy. We prepared well for this game and felt confident, but unfortunately anything can happen in football. Now we need to recover and react straight away. We could’ve been more aggressive and we’ll try to rectify that from the next match.” 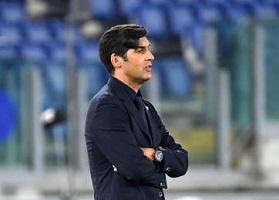 Italians Roma secured one of the biggest wins of the night, beating CFR Cluj 5-0 at the Stadio Olimpico to move three points clear at the top of group A. Roma were three goals up in 34 minutes against the Romanians, who were captained by naturalised Portuguese defender Camora, delighting their boss Paulo Fonseca.

“There were many positives, and it’s always important to keep a clean sheet,” Fonseca told Sky Sport Italia. “It might seem like an easy game now, but Cluj had good results in the Europa League, they were Champions of Romania for three seasons running. We started strong and it all becomes easier when you do that.”

Tottenham’s 3-1 win at Ludogorets sees them go top of group J as they join Antwerp and LASK on six points in what is a well-contested battle for the top two places. Spurs manager José Mourinho fielded a strong team in Bulgaria after last week’s surprise defeat at Antwerp, and following the match the Portuguese insisted he was certain in his selection.

“We couldn’t lose two matches,” Mourinho said. “We couldn’t go with three points to the last three matches, because then these matches would become knockout matches almost, so at this moment, six points, two matches at home (remaining), I think we have to do the job and qualify, of course.”