The Danilo position debate: Most important thing is he plays – Pauleta 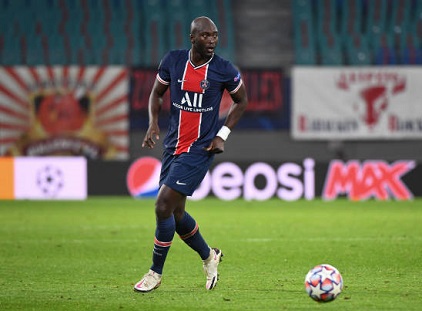 Danilo Pereira is only a handful of matches into his Paris Saint-Germain career, yet the Portugal international has already become subject of much discussion over his new position in France.

The 29-year-old moved to the French capital at the end of the transfer window from FC Porto on a season-long loan deal with an obligation to buy. While the move appeared to address PSG’s deficiencies in midfield, Danilo has quickly been re-positioned as a central defender and found himself in the middle of political strife within the club.

Tension between PSG coach Thomas Tuchel and sporting director Leonardo has been growing over recent weeks, particularly after the German publicly expressed dissatisfaction at the club’s transfer policy shortly before the close of the window. Director Leonardo responded by stating he “did not appreciate Tuchel’s comments” and that Tuchel would need to accept the board’s decisions if he was to remain in charge.

Leonardo and the club were busy during the final 24 hours of the window, sealing three signings to bolster Tuchel’s squad, with Danilo joined by striker Moise Kean from Everton and creative midfielder Rafinha from Barcelona. Danilo duly made his debut in a defensive midfield role in the 2-1 home defeat to Manchester United in the Champions League.

Since then, however, the Portuguese has been dropped back into central defence to partner either Presnel Kimpembe or Abdou Diallo, while traditional centre-back Marquinhos has played in midfield. Some have interpreted Tuchel’s switching of Danilo’s position as a provocative message to Leonardo and the decision-makers, and the player himself has already commented: “It’s not my position, I’m a midfielder. I apply myself to do what the manager is asking for. I know the defender position to a basic degree. I am trying to get used to it. My team-mates are helping me a lot to find my bearings, my place in the defence.”

Portuguese media sought the opinion of a particularly well-placed figure this week. Pedro Pauleta, Portugal’s second-highest all-time marksman, enjoys legend status at PSG where he ranks third best goalscorer in the club’s history having found the net 109 times during a less fashionable period for Les Parisiens.

“Everyone knows Danilo is a midfielder,” Pauleta began. “We have been used to seeing him as a midfielder, but football is rich for this reason: the coaches have different opinions. Tuchel thinks Danilo can give more to the central defence in a position PSG needs it after Thiago Silva left. The most important thing is that he’s playing, even if we all know midfield is his position.

“He is a good signing,” added the Azorean. “He’s a valuable player and I believe he will help PSG a lot.”

Tuchel’s position has come under closer scrutiny this week after PSG lost for the second time in three matches in the Champions League, going down 2-1 at RB Leipzig in Germany. With Manchester United leading Group H, PSG look set to require a positive result against Leipzig when the teams meet in Paris later this month.

Portugal boss Fernando Santos has downplayed suggestions Danilo could be likely to transfer his new role to his national team when asked about the issue. “With all due respect [to Tuchel], Danilo has a position and for me, it’s in midfield,” Santos said. “He could play centre-back in certain scenarios, like William. But, Danilo will continue in midfield with the Seleção.”

Well, many fans have been hoping that Danilo as an option at Center Back for the Selecao, so now we have him getting some experience in that area.

I don't necessarily think that is a bad thing, he may turnout to be a good CB, in which case that...

Well, many fans have been hoping that Danilo as an option at Center Back for the Selecao, so now we have him getting some experience in that area.

I don't necessarily think that is a bad thing, he may turnout to be a good CB, in which case that would be great for the Selecao as we are still dependent on Pepe and Fonte as a backup. However, if he isn't good at CB, he may lose some of his DM skills and timing.

We will see how this plays out.

Danilo at CB. Renato in his place next to William.