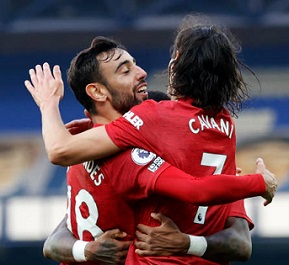 Bruno Fernandes produced a Man of the Match performance for Manchester United against Everton on Saturday lunchtime, scoring twice and assisting the other goal as the Red Devils came from behind to win at Goodison Park.

Fernandes turned the game for his side during the first half to send United into the break ahead, and after the match boss Ole Gunnar Solskjaer praised the Portuguese for “leading the boys” to victory.

United, reeling from the shock of a dire 2-1 defeat to Istanbul Basaksehir in Turkey in the Champions League during the week, looked set for another tough afternoon when Bernard put Everton in front on 19 minutes. However, Fernandes drew the visitors level a little over five minutes later with a superb header from Luke Shaw’s cross.

Fernandes was again involved as United took the lead on 32 minutes when his cross, intended for striker Marcus Rashford, evaded a further touch and nestled inside the far post of Jordan Pickford’s goal. With United leading for the remainder of the game, Fernandes’ tenacity, work rate and pressure on the ball stood out as the former Sporting man gave a full demonstration of his qualities to help his team to a vital win.

Fernandes capped his performance in stoppage time by laying on a first United goal for Edinson Cavani with a clever reverse pass, and manager Solskjaer was quick to pay tribute to his star man. “Bruno was brilliant, top, absolutely top,” Solskjaer said. “Fantastic. It was a great performance, of course, leading the boys.

“His desire and determination, he’s everywhere on the pitch. Sometimes that frustrates me because sometimes passes are played to where he should have been and he’s not there. But when you’ve got someone who drives them [the team] on like this, of course you’re very happy.”