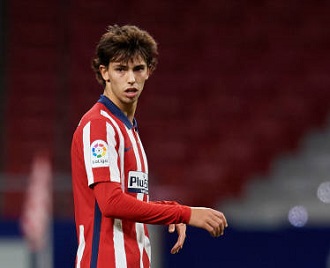 Portuguese international João Félix is a joint-leader at the top of the Spanish “Pichichi” top goalscoring chart in La Liga after his brace helped Atletico Madrid to a 4-0 victory over Cadiz on Saturday.

Félix continued his impressive recent form by taking his recent tally to six goals in four matches, scoring his third brace in the last two weeks. An early header from the Seleção man put Atletico ahead, and Felix added an assist to his performance by supplying Luis Suarez, before finishing off the scoring himself in the final minute with an excellent touch and finish.

As a result, both Félix and teammate Suarez are leading the top goalscorer standings in La Liga alongside Real Sociedad’s Mikel Oyarzabal on five goals. The tally means Félix is already just one goal short of his total for the whole of last season, when he scored six during his debut campaign, following a high-profile move from Benfica.

Guess who’s on the front page this Sunday morning in Madrid 🇵🇹 pic.twitter.com/06TBLbwScC

With Barcelona and champions Real Madrid in unconvincing form, many are tipping Atletico for a strong title challenge this year. Diego Simeone’s undefeated side are in 3rd place in La Liga, three points off leaders Sociedad with two games in-hand ahead of a home clash with Barcelona after the international break.