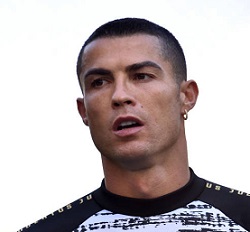 This weekend was highly productive in front of goal for some of Portugal’s most recognised current stars, with Cristiano Ronaldo scoring on Sunday for Juventus to add goals from André Silva, Bruno Fernandes and João Félix the previous day.

Ronaldo’s strike for Juventus at Lazio looked to have given the Bianconeri three points, but a 95th-minute equaliser denied the champions. Elsewhere, Silva’s goal ignited Frankfurt’s comeback from 2-0 down to draw at Stuttgart in Germany, while there was a precious winner by Rafael Lopes in Poland and Nani and Fábio Martins scored wonder goals in MLS and the Middle East respectively.

Cristiano Ronaldo’s afternoon with Juventus took an unfortunate turn on Sunday when his goal was cancelled out in stoppage time by Lazio, after the Portugal captain had been withdrawn through injury. Ronaldo put Juve ahead in the capital during the first half from close range, getting on the end of Juan Cuadrado’s cross for his sixth goal in four Serie A matches.

However, Ronaldo’s involvement was cut short when he was forced off with an ankle injury fifteen minutes from time. Juventus held onto their 1-0 lead until the 95th minute when former Sporting striker Felipe Caicedo struck to give Lazio a share of the spoils. Ronaldo was seen holding ice against his ankle on the touchline, having informed Juve boss Andrea Pirlo he had suffered a twist before coming off the pitch.

“Ronaldo is a key player not only for us but for all the teams where he played, he had an ankle problem and he was forced to leave,” Pirlo told reporters about Ronaldo, who will undergo a scan ahead of Portugal’s international fixtures.

André Silva is enjoying similarly impressive goalscoring form, despite a slump in results at his club Eintracht Frankfurt. The former Porto striker scored a crucial goal this weekend with his side trailing by two goals at Stuttgart, after which Frankfurt fought back to secure a 2-2 draw at the Mercedes-Benz Arena.

Frankfurt are winless in five matches but Silva’s goal was his seventh of the season in all competitions, while his tally of five Bundesliga goals represents half of his team’s total scored so far from their 7 matches played. Silva’s overall league record for the club stands at an impressive 17 goals from 32 appearances.

The two most spectacular strikes of the weekend both came outside Europe, beginning with Fábio Martins’ first goal in the colours of Saudi Arabian club Al Shabab. The former Braga and Famalicão midfielder joined Pedro Caixinha’s side during the summer and his third appearance on Friday brought a stunning first goal in Al Shabab’s 3-1 win at Al Fateh.

In the United States, MLS is set to enter its latter stages and Portugal legend Nani warmed up for the play-offs with a memorable goal for Orlando City. Although his side were beaten 3-2 at home by Nashville, Nani’s free-kick on the hour gave Orlando a 2-1 lead and the former Sporting man’s form is a boost for the club ahead of their clash with New York City FC in the final stages.

Rafael Lopes was the hero for Polish champions Legia Warsaw this weekend, scoring in what was literally the last second of allotted injury time to earn three points against Lech Poznan. The game was level at 1-1 when Lopes headed in at the back post with what was the last action of the match at the end of two minutes stoppage time.

Lopes arrived at Legia during the summer, having played in the Ekstraklasa for Cracovia Krakow last term following a move from Boavista. The 29-year-old has made four appearances in the league for his new side, all of which have been as a substitute, and the weekend’s winner was his first goal in Legia colours.

Nice moment in Poland this weekend: Rafael Lopes scored his first goal for champions Legia Warsaw in the last second of added time to give them victory against Lech Poznan 🇵🇹🇵🇱
pic.twitter.com/Jc6Rm3spba

Mathias Lage scored his first Ligue 1 goal since the opening day of last season for Angers in their emphatic 5-1 win at Nimes on Sunday. The 23-year-old, who was born and raised in France but declared for Portugal as a youth international at U21 level, put Angers ahead inside a minute ahead of a convincing victory which moves them up to 9th place.