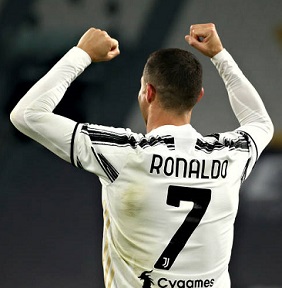 Cristiano Ronaldo picked up where he left off on his return to domestic action this weekend, scoring with two superb first-half finishes to give Juventus a win over Cagliari in Serie A.

Ronaldo has now scored in each of his first five league appearances this season, something the Portugal captain had only done once previously: with Real Madrid in the 2014/15 season.

Both goals were superbly taken, beginning with a 38th-minute opener which saw Ronaldo shift the ball inside onto his right foot and fire across Cagliari goalkeeper Alessio Cragno into the far corner. The second came four minutes later and saw Ronaldo meet Merih Demiral’s flick-on with a splendid improvised volley at the back post.

During the second half, Ronaldo selflessly passed up the opportunity for a hat-trick by dummying when in a good shooting position to create an opening for Filippo Bernadeschi, who was unable to convert. In the end, Ronaldo’s brace was enough for all three points and sees him on eight goals from just five appearances in Serie A this term.

“Ronaldo is a great professional, as we all knew, and he sets the example for everyone around him in both the matches and training,” Juve boss Andrea Pirlo said after the match. “The only advice I can give him is keep going like this!”

With goals in each of his showings in the league so far this season, Ronaldo became the first Juventus player in 25 years to score in their opening five Serie A appearances. For Ronaldo, the feat had only been achieved once before in his career: during the 2014/15 season while playing for Real Madrid in La Liga.

I make black masks with the FPF emblem on it if anyone is interested.