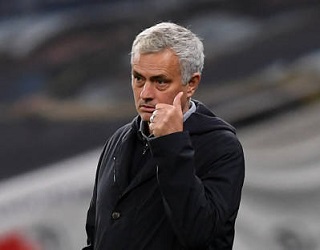 The performance level of Portuguese across the continent has been recognised this week with the monthly awards in Europe’s three most high-profile leagues being dominated by Luso exports.

Cristiano Ronaldo, João Félix and Bruno Fernandes were named Player of the Month in Italy, Spain and England respectively, while José Mourinho landed the Premier League Manager of the Month and Diogo Jota and Rúben Dias picked up further awards.

Ronaldo was named Serie A’s MVP for November in an announcement last week. Despite playing just 200 minutes, the Portugal captain returned an impressive record of one goal per 40 minutes, meaning an average of two goals each game. His goals came against Spezia (2), Lazio and Cagliari (2) as Ronaldo battles for the Serie A top goalscorer crown, with his tally of 8 currently two behind leader Zlatan Ibrahimovic.

In Spain, João Félix picked up La Liga’s Player of the Month for November in what is a reflection of the growing importance of the forward at Atletico Madrid. Félix scored twice and provided a further assist for Atletico, who currently occupy top spot and are tipped by many to be a stern contender for the title in Spain.

English football is awash with Portuguese talent and November’s awards saw four of the country’s foreign contingent issued accolades. Bruno Fernandes has become a familiar recipient of the Premier League Player of the Month award and the former Sporting man picked up the prize for the third time since his arrival in England in February.

Introducing your @EASPORTSFIFA Player of the Month for November...

Diogo Jota, who has enjoyed a sensational start to life at Liverpool, received the PFA Premier League Fans’ Player of the Month. Jota has scored nine goals for Jurgen Klopp’s side despite only starting ten matches in all competitions. Meanwhile, Rúben Dias emphasised his fine start at Manchester City with the club’s Player of the Month award.

Finally, perhaps the most significant award sees José Mourinho named Premier League Manager of the Month for November after guiding Tottenham Hotspur to the top of the table. Mourinho has since enjoyed a strong start to December by keeping Spurs top of the standings with a 2-0 North London derby victory over fierce rivals Arsenal last weekend. Remarkably, it is Mourinho's first Manager of the Month award in England since 2007.

A special award for a special manager 👏

What happened to Quaresma? Wasn't he supposed to come in on a horse or something? I'd like to see a team entirely made of has beens with Quaresma, Varela, Nani, Coentrao, and Veloso.