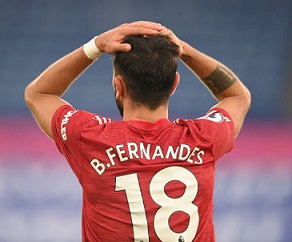 The Premier League was back in action on boxing day and it was a positive round of matches for the Portuguese contingent in England’s top flight.

Bruno Fernandes was the star of the show in the opening game at lunchtime, getting another goal and assist as Manchester United were held 2-2 at Leicester City, while João Cancelo was among those involved in the later games and the full-back drew praise for his part in Manchester City’s win over Newcastle.

Fernandes took his league goal tally to ten during United’s 2-2 draw with Leicester at the King Power Stadium. The former Sporting midfielder had already assisted the opener for Marcus Rashford in the first half and seen another key pass squandered by the England forward, before Fernandes put United 2-1 up on 79 minutes with what appeared a winning goal.

However, Jamie Vardy forced an own goal by Axel Tuanzebe five minutes from time to deny United. Fernandes, who was voted Man of the Match for his impact, told the press after the final whistle that he was happy to see his teammates so dejected by the loss of two points.

The key action from our Boxing Day draw.

“We were not happy enough with this point despite knowing we played against a good team.

“Of course, I’m frustrated as I know we had the chances to get the three points, which is important for us as we want to win all our games. I think I’ve said before that we have a good team and we have the chances to win this game. The goal was a little bit lucky but we have no time to be disappointed.

“We have just three days, another game in three days, and we have to do much better to get the points, as we’ll play against a good team [Wolves at Old Trafford on Tuesday].” 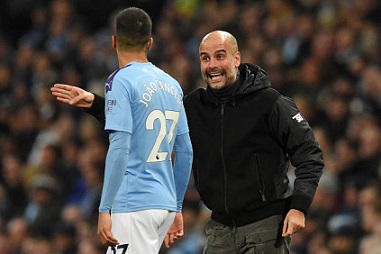 Manchester City moved up to 5th and closed the gap to rivals United with a routine 2-0 win over Newcastle United at the Etihad Stadium. The match saw City boss Pep Guardiola start all three Seleção internationals for the third match running as Rúben Dias and João Cancelo were again joined in the side by Bernardo Silva, who has regained his place in Guardiola’s side of late.

Cancelo, who was deployed at right-back, had a part in both the City goals, scored in each half. First he fed Sterling with a nice pass inside the box for the England forward to set up Ilkay Gundogan for a simple finish, before later winning possession in the right channel and firing a cross into the danger area, with the subsequent clearance falling to Ferran Torres who made it 2-0.

Watch the highlights from our win over the Magpies 🎥

“In the beginning when he arrived, it wasn’t easy for us – him or me,” Guardiola said of Cancelo after the match. “Now, we understand a lot of things.

“He’s a player with incredible quality, and his regeneration and physicality is incredible. He could play tomorrow!

“But he always has to be focused. He can be distracted, which is dangerous for a defender.

“In the final third, he has a special quality. He has courage. Sometimes I ask him to play in different positions than what he is comfortable with.

“In the second half, especially next to his friend Bernardo, he was very good.”

Elsewhere in the Premier League, Ivan Cavaleiro played 90 minutes as relegation-battlers Fulham held Southampton at Craven Cottage, while André Gomes came on for the final 16 minutes and helped Everton snatch a 1-0 win at Sheffield United to go second. Cédric Soares was an unused substitute as Arsenal beat London rivals Chelsea 3-1 at the Emirates Stadium.

Cancelo is looking like a Portuguese Marcelo. You know he is going to brain fart every now and then but going forward he is amazing!