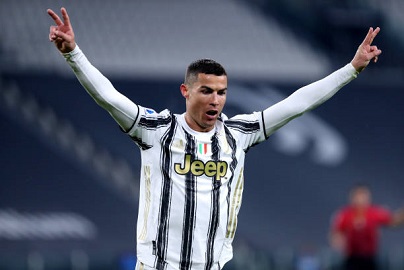 Cristiano Ronaldo scored twice this weekend to reportedly overtake Pele as the second-highest goalscorer of all time, as Portugal’s talisman shows little sign of slowing down in 2021 with Juventus.

Meanwhile, a reduced football schedule in the first weekend of the new year did little to slow the Luso impact across the continent as Rafael Leão, Bruno Fernandes and Rúben Neves struck in Europe’s biggest leagues, and there was a brace for Lucas João in the Championship and Vieirinha scored a late penalty in Greece.

Ronaldo was in sensational form on Sunday evening as Juventus beat Udinese 4-1 in Serie A. The Seleção captain scored twice and laid on a superb assist to help the Bianconeri regain some form in what looks set to be an exciting race for the Italian title, which Juve are aiming to win for the tenth consecutive season.

The hosts went ahead after half an hour when Ronaldo finished superbly with his right foot to give Juve a half-time lead. He then turned provider just minutes after the re-start with a deft throughball for Federico Chiesa to double the champions’ advantage, before Ronaldo helped himself to his second with an unerring finish with his left foot. Marvin Zeegelaar scored a late consolation for Udinese and Paolo Dybala then restored Juve’s three-goal margin.

According to various reports, the double saw Ronaldo equal and then exceed the goalscoring record of Brazilian legend Pele. Ronaldo’s first drew him level with the three-time World Cup winner on 757, before surpassing the feat with his second-half strike to move behind Josef Bican who is credited with 805 according to FIFA.

Also hoping to help his side to Serie A glory this season is Rafael Leão, who at 21 is fourteen years younger than Ronaldo and in search of his very first career trophy. The former Sporting forward has made big strides in his development over the last six months and Leão scored a memorable goal in Milan’s 2-0 win at Benevento.

The Rossoneri stay top of the table after the victory, which saw Leão score from a tight angle early in the second half. “It’s one of the most beautiful goals of my career, but the most important thing is the victory,” Leão told Sky Sport Italia after the match.

“We went down to 10 men, it was the most difficult match we’ve had, but we kept playing and deserved the win. The key every time is the mentality. If there’s no Ibra, there’s Rebic. If there’s no Rebic, then Hauge plays. We see the mentality of the team remains the same.

“We knew Inter had won 6-2 earlier, but we were fully concentrated. Soon there’s another big game and we want to win that too, because we are aiming for first place. I have to thank the coach, because he always puts his faith in me, both in training and during the match. I am learning so much from him.”

Bruno Fernandes scored the winning goal from the penalty spot on Friday evening as Manchester United continued to assert themselves as title contenders in the Premier League with a 2-1 win over Aston Villa at Old Trafford. The win saw United go level on points with champions Liverpool at the top of the standings.

Villa made United work hard for the victory, shading possession and cancelling out Anthony Martial’s goal on the hour mark through Bertrand Traore. Fernandes’ penalty put him on 11 league goals so far this season; only Mohammed Salah of Liverpool and Heung Min Son of Tottenham have scored more in the English top flight.

Also in the Premier League, Rúben Neves scored from the penalty spot for Wolverhampton Wanderers, who squandered a two-goal advantage to draw 3-3 at Brighton. Neves’ penalty put Nuno Espírito Santo’s side 3-1 up just before half time, but Brighton fought back to deny a Wolves team also containing Rui Patrício, Nélson Semedo, João Moutinho, Vitinha, Pedro Neto and Fábio Silva.

Elsewhere in the race to gain promotion to the Premier League, Portuguese striker Lucas João continues to make himself one of the standout strikers in the Championship with Reading. The ex Nacional forward scored twice for the Royals on Saturday to help them to a 2-1 win at Huddersfield as they remain in the play-off places.

João has 13 goals from just 16 appearances in the league this season, with only Ivan Toney (Brentford) and Adam Armstrong (Blackburn) ahead in the top goalscorers charts with 16 apiece. The tally represents a career best in league football for João, despite being less than halfway through the season.

Lucas João with two more goals for Reading in the Championship. The second a screamer from distance. They beat Huddersfield 2-1. João has 16 goals in 18 games in all comps. pic.twitter.com/BZbzprhMB5

PAOK stalwart Vieirinha scored a dramatic 96th-minute penalty to save his side from a shock defeat to Larissa in the Greek Super League on Sunday. The visitors found themselves trailing 1-0 at relegation-threatened Larissa before the penalty award offered the lifeline of a point and 34-year-old Vieirinha converted as PAOK drifted seven points behind Pedro Martins’ champions Olympiacos, who thrashed AEK 3-0 this weekend.

In Cyprus, former Belenenses forward Kikas scored twice for Doxa in a 4-3 defeat to Nea Salamis, while ex-Porto midfielder Josué continues to be a strong influence for Hapoel Be’er Sheva in Israel with the winning goal – his sixth in 13 matches – in a 1-0 victory at Maccabi Netanya.