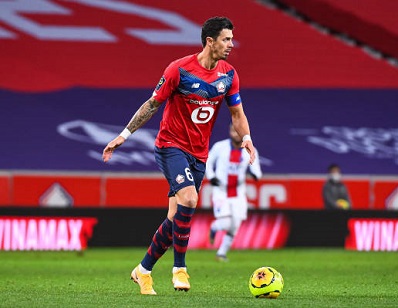 José Fonte admits that he has been forced to continue to develop his game as a central-back in French football with Lille, as he enjoys his third season with the club in Ligue 1.

The 37-year-old arrived in France in 2018 from Chinese side Dalian Yifang in what was a surprise move for the veteran defender. During his time back in European football, Fonte has been installed as Lille captain and has started 17 out of his team’s 18 matches in the league so far this season.

“To be honest, what Christophe Galtier [coach of Lille] asks a central defender shook me up a little,” Fonte told France Football earlier this week. “In 2018, when I arrived in Lille, I needed to adapt because I was coming off eleven seasons in England. At Crystal Palace, my coach promised to pay me five pounds whenever I cleaned the ball up front.

“But it is my job [to participate in the build-up phase]. I don't say to myself, 'Wow, I made a beautiful pass that broke and opened up the opponents’ midfield.' But if that pass allows Jonathan Bamba, who always cuts inside, to get an assist for someone then it's a great feeling.  But I'm not Gerard Piqué!”

Although Fonte’s time with Palace in the English Championship offered little preparation for a more cultured distribution from defence, his spell in the Premier League saw the former Benfica man experience a full education in dealing with some of the game’s toughest opponents. “From 2012 to 2018, I faced all the great goalscorers there: Rooney, Tevez, Ibrahimovic, Agüero, Rooney, Torres, Anelka, Lukaku, Drogba,” Fonte recalls. “I remember the science of movement of Van Persie, the malice of Suarez, great intelligence of Kane…”

For now, Fonte remains focused on keeping himself in condition to prolong his career, having made 24 appearances already for Lille in all competitions this term as well as remaining in the Portugal set-up. Fonte has amassed 43 caps for the Seleção, the last of which came in November in the UEFA Nations League against France.

“Today's football is made up of super athletes,” he says. “Those who sleep, drink and eat poorly suffer repeated muscle damage. As my family lives in London, I am alone in Lille. It is not easy, but it gives me the opportunity to focus 100 percent on my work. If I had my children at home, I wouldn't be in the training centre until 4pm recovering. And I wouldn't sleep so well.”

GDChaves
This comment was minimized by the moderator on the site

To be world class, the commitment to training, nutrition and recovery is necessary. I think Ronaldo is rubbing off on Fonte and others at the selecao.

Fonte and other athletes like LeBron James have more access to world-class facilities now, compared to the iron age of sport where you just got over your aches and bruises. Nutritional science has made leaps and bounds in sustaining muscle...

Fonte and other athletes like LeBron James have more access to world-class facilities now, compared to the iron age of sport where you just got over your aches and bruises. Nutritional science has made leaps and bounds in sustaining muscle development and aiding recovery. Fonte will be playing till his 40s at this rate.