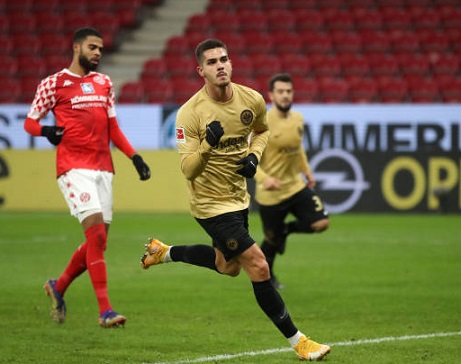 André Silva scored twice from the penalty spot on Saturday to give Eintracht Frankfurt their third consecutive win in the Bundesliga against Mainz.

Former Porto man Silva put his side ahead midway through the first half and then doubled Frankfurt’s advantage with around 18 minutes left. His first put him into double figures for league goals this term and with 11 goals to his name Silva is now just one short of his tally for the whole of last season.

Speaking after the match, Frankfurt boss Adi Hutter praised Silva’s performance. “André Silva is the solo forward up top, but he does it really well,” Hutter said. “He wasn't rewarded against Leverkusen, today he was. His composure on penalties reminds me of Robert Lewandowski, who always turns ice cold.”

Silva also spoke to the media, adding: “We wanted to have more control over the game, but the pitch wasn't very good. It was very difficult to move the ball. Nevertheless, we deserved the win, congratulations to the whole team.”

André Silva scored a couple of penalties this afternoon to give Frankfurt a 2-0 win at Mainz. That’s 11 Bundesliga goals for Silva; one fewer than he got all last season 🇵🇹🇩🇪

Frankfurt moved up to 9th in the table, while only Lewandowski of Bayern and Dortmund’s Erling Haaland have scored more goals than the Portuguese. Lewandowski leads the way (20) ahead of Haaland (12) with Silva in third (11) in the top goalscorers charts.