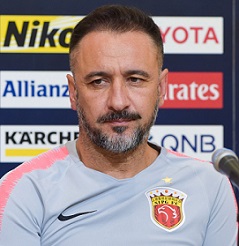 Vítor Pereira says he is keen to test himself in one of Europe’s major leagues, after ending his three-year stint at Chinese side Shanghai SIPG last month.

Former Porto coach Pereira lifted the Chinese Super League title in 2018, guiding Shanghai to their first-ever national championship. Although performance level during 2020 was not as high, the Portuguese leaves the country with great memories and a positive impression of the development of football in East Asia.

“It was a fantastic experience,” he said in an interview published last week. “In the first year we won the Super League and the following year we also won the Super Cup. This third season was difficult for everyone, but, broadly speaking, it was a good stage in my career. Now I am returning to Europe because I think I need a challenge in a major European league.

“The title we won meant the breaking of Guangzhou Evergrande’s hegemony after their seven consecutive titles. It was a great achievement for Chinese football in general and for our club in particular. For a club that was only thirteen years old and had started from the bottom it was undoubtedly a great success.

“In the 2019 season we had several problems. We lost Wu Lei to Espanyol and with that we lost speed in the attack we were no longer as attractive as the year before. But we were having a consistent season and getting results. But in the middle of the season Elkeson also left and we were left without strikers. On top of that, he was sold to a direct rival and continued to score goals. For me it was a mistake that we made and we paid the consequences for that.”

"I need to prove myself in Europe"

Having arrived to replace compatriot André Villas-Boas at Shanghai, Pereira insists he was positively surprised by the experience and would consider returning to China in the future. For now, however, his goal is to coach in one of the major European leagues, where he hopes to build on a record which sees him as one of only four Portuguese coaches to win league titles in three different countries (Portugal, Greece and China).

“For me, Chinese football was a big surprise,” he said. “It is much more competitive than I thought before I got there. In addition to Shanghai SIPG, there are several teams like Guangzhou Evergrande, Beijing Guoan, Shandong Luneng and Jiangsu Suning who fight for the top places. They are teams that can compete at a good level. And they also have European level players with quality. It’s a league that has grown a lot in recent years. Tactically I saw an evolution in all the teams in the last three years. I think one day I will come back. Not least because I liked the country’s culture and the respect with which I was treated by people while I was there.

“I have decided to return [to Europe] for two reasons. First, to be closer to my family, especially after this season during which I spent many months not seeing them. Secondly, the three years in China were a fantastic experience, but now is the time to train in one of the five major leagues, I need to prove myself in one of them.”

Very good manager who never got the credit he deserved from my Porto compatriots. Managed to go 2/2 title winner as Porto boss, and with half the squad AvB had.

AvB got all the praise but it was his squad that won him everything (Otamendi when...

Very good manager who never got the credit he deserved from my Porto compatriots. Managed to go 2/2 title winner as Porto boss, and with half the squad AvB had.

AvB got all the praise but it was his squad that won him everything (Otamendi when he didn't suck, Alvaro, Hulk, Falcao, Fernando, Moutinho, James, Rolando, Guarin, etc).

Vitor lost some of these guys the next season and then practically all of them the following season and got blue chips like Defour and Djalma. And he had 1 loss in 60 Liga games, including one undefeated season.

Besides that, this guy was Da Tru!!! You can't argue with Da Tru! Hope he gets a gig in Spain or Portugal.

Very much agree Chris. Really looking forward to see where he shows up.

Double agree! Can you imagine any English reporter disrespecting VP? He would lay an epic verbal rape on that poor soul.