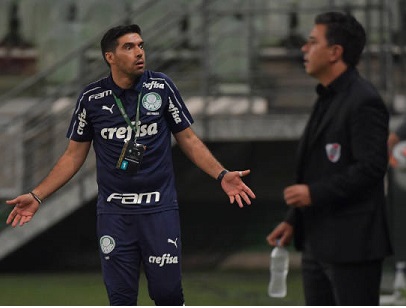 For the second year running South America’s Copa Libertadores final will have a Portuguese coach contesting the occasion in charge of one of Brazil’s biggest clubs.

Abel Ferreira’s Palmeiras reached their first final in over twenty years on Tuesday night when they survived a fierce fightback from Argentine giants River Plate to advance 3-2 on aggregate at Allianz Parque.

Palmeiras were overwhelming favourites for qualification to the final after a remarkable 3-0 win over River in last week’s first leg in Argentina. However, the return in Sao Paulo adopted a very different theme as River dominated Palmeiras and led by two goals at half time, before a second half packed with VAR controversy.

With River needing a third goal in the second period to level the tie, Abel’s side survived three major VAR calls as the visitors saw a goal disallowed for an offside during build-up, a penalty award overturned and a late shout for another penalty dismissed after video review. Even Robert Rojas’ 73rd-minute sending off for River did little to prevent the constant pressure on the hosts’ goal.

“River has a better coach than me”

Somehow, Abel’s men survived to advance 3-2 on aggregate courtesy of their efforts in the first leg. Speaking after the match, Portuguese boss Abel was humble in his appraisal of the match and of River, led by highly-rated manager Marcelo Gallardo.

“We gave everything,” he told the Portuguese press. “We had to suffer, yes, but the qualification was the result of what we did in Argentina. It was a game in which we could have scored more goals, because the same opportunities they had here, we had there. Across two legs we got a 3-2 win.

“River has a better coach than me. They also have players with great experience. In the past five years, they have been in the semi-finals, and have won the competition twice. But for me and my players, there is only one way to gain experience and that is to go through it. So today we went up the mountain, we saw the view from up there and it is very good. Now, we will go down again, recover and look at the next match.”

Abel has been in charge of Palmeiras for just a few months, but during his short tenure the former Sporting and Braga man had already booked his side a place in the final of the Copa do Brasil with a superb 2-0 win at Atletico Mineiro. In the Brazilian league, Palmeiras find themselves nine points off leaders Sao Paulo with two matches in-hand, meaning a title charge in the last third of the season remains a possibility.

“We are in two finals. In the championship we will fill our pockets, and in the end we will see what comes to us. I don't think much. I want to enjoy now for 24 hours, to appreciate this final. It was very sweaty, we went through a lot, we had to climb a very big mountain. Tomorrow we have to go down again and get ready to climb another mountain, because you can't always be on top of the summit.”

“I've run out of words to praise my players. We played an absolutely fantastic match.”