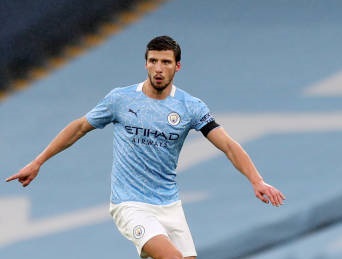 Rúben Dias has been one of the revelations of the Premier League season so far with Manchester City, having surprised many by the maturity and consistency of his performances since a summer move from Benfica.

However, for teammate and Seleção colleague João Cancelo, the development of the 23-year-old centre-back comes as no shock given Dias’ qualities on and off the pitch.

“Rúben didn't need much help, he came and already spoke perfect English, his teammates were impressed with the leadership he has on the field and in the dressing room,” Cancelo told Portuguese reporters this week. “I am not impressed, I already knew him.

“Even in the days of Benfica, he being three years younger, the coaches I spoke to said that he was a born leader. You see it in the national team, here [in Manchester] it’s the same thing. I am not surprised that Rúben is adapting so well, he is a player with a strong mentality and incredible talent.

“I will not say that he is the hardest worker on the team, because that would be unfair to others, but he’s more hardworking than me for sure [laughs]. He arrives before everyone else, he goes to the gym every day. It’s not forced, it is his routine and he is a focused player with a strong mentality.”

“I've run out of words to praise my players. We played an absolutely fantastic match.”