Cristiano Ronaldo hits 760 goals and 31 trophies: “I love this feeling” 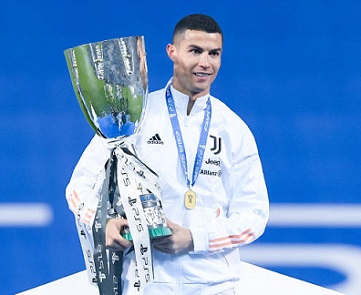 Cristiano Ronaldo reached the much-anticipated 760-goal mark on Wednesday night as Juventus won the Italian Supercup with a 2-0 victory over Napoli at the Mapei Stadium in Reggio Emilia.

Ronaldo’s goal is regarded by some to have seen him become the all-time highest goalscorer in the history of football, but one statistic which is indisputable is the Portugal captain’s tally of 31 career trophies after his latest medal.

Ronaldo broke the deadlock against Napoli in the 64th minute from close range, firing in with his left foot for his 20th goal of the season. Alvaro Morata wrapped things up deep into stoppage time to seal the win, giving Ronaldo yet another trophy to add to his collection.

“I love this feeling,” the Seleção skipper wrote on social media on Thursday morning accompanying a photo of him holding the trophy. Ronaldo told reporters after the match: “We are very happy with the win, it was difficult, especially as the pitch was terrible, but we got it done. We showed a different attitude to the bad performance against Inter. That is the past, this is a very important trophy and we hope this can give the team more confidence going into the future.”

While some outlets have declared Ronaldo the all-time leading goalscorer in football after his 760th goal, PortuGOAL.net adheres to the The Rec.Sport.Soccer Statistics Foundation (RSSSF) which recognises Josef Bican’s tally of 805 goals. The Portuguese Football Federation congratulated Ronaldo on his milestone, while acknowledging that Bican is still the official highest scorer.

I wish somebody would just clear it up once and for all. Pele and Romario also claim over 1000 goals.

Pele would claim he brokered world peace and created the world in 7 days if he could.

Pele is the P4P G.O.A.T. egomaniac. He's not even the best Brazilian player, let alone best player in the world.

Pele would claim he brokered world peace and created the world in 7 days if he could.

Pele is the P4P G.O.A.T. egomaniac. He's not even the best Brazilian player, let alone best player in the world.

Josef Biscan has the record goals scored at 805 official and over 1,400 unofficial. The problem is you can't count the unofficial goals because they aren't from sanctioned games.

Pele is a sad little man who has a fragile ego and is, along with Neymar, one of the greatest hype jobs in soccer. Never played in Europe, counts his "goals" in the army and coast guard, his goals against his grandson in the backyard and even the goals in his dreams.

Messi and Ronaldo are the real deal that have done it at the highest level consistently.