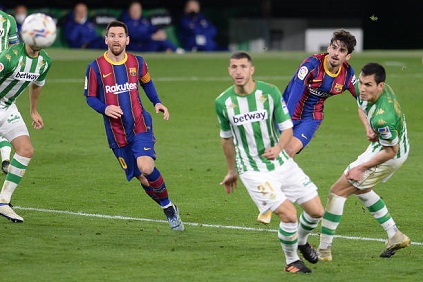 With Barca trailing 1-0, both Trincão and Lionel Messi entered from the bench in the 57th minute and the pair would go on to inspire a comeback which was crowned by a late piece of brilliance from the former Braga winger.

The visitors had trailed since the 38th minute to Borja Iglesias’ opener for Betis, who had William Carvalho among their substitutes. Messi and Trincão were thrown on by Barca boss Ronald Koeman early in the second period and within two minutes Messi had levelled the game up at 1-1, after which an own goal from Betis defender Victor Ruiz put Los Cules ahead.

Ruiz then scored at the correct end to equalise for Betis, but with three minutes left to play Trincão’s moment arrived. The 21-year-old received the ball on the edge of the area and beat Joel Robles in the Betis goal with a perfectly-placed shot with his favoured left foot, giving Barca all three points and registering his first goal for the club.

“I didn't need to score, just do my job, because you have to help,” Trincão said after the match. “I'm very happy for the team and the victory. We changed our attitude in the second half. It was the most important thing for the victory.

“The spirit of my teammates helps me a lot. They have all congratulated me for the goal.”

Barcelona boss Ronald Koeman, who has been giving Trincão more minutes in recent weeks, added: “He is young, he has to adapt to the level of a great [club] like Barcelona. We have been giving him minutes. In recent games he has had bad luck, missing chances. Today has been decisive and is important for him and for us.”