“I don’t forget that when my father died, he called” – Mourinho speaks on his true relationship with Pep Guardiola 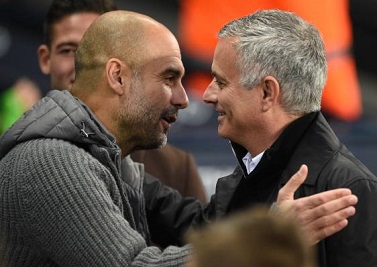 Jose Mourinho has been speaking about his off-field friendship with Pep Guardiola, ahead of this weekend’s Premier League clash between Tottenham Hotspur and Manchester City in the Premier League.

Mourinho and Guardiola first met at Barcelona in the mid 1990s, when the former was an aspiring young coach working under Bobby Robson and Guardiola was the lynchpin of the Catalan side’s midfield.

Since their three years at Camp Nou, which extended into Mourinho working under Louis van Gaal and Guardiola being promoted to club captain, the pair have been best known for their managerial rivalry which peaked when the Portuguese led Real Madrid against fierce rivals Barca in La Liga.

“With Pep I keep the three years where we were together [at Barcelona] and we saw each other every day. We celebrated together the titles we won, we didn’t cry but we were disappointed together when we lost important things. Great periods of our lives: him as a player and myself as a young assistant. And that’s what I keep.

“There are things people don't see”

“We have moments in life where we don’t forget things. One of the things I don’t forget is when my father died, he knew how important my dad was to me so we had a call. By the way, today would be my dad’s birthday: he would be 83 today. And of course when his mum died, I replied the same way.

“So there are things people don’t see. We don’t need to share, but I’m sharing because I now have the opportunity. But I only have good memories of him when we were together.”