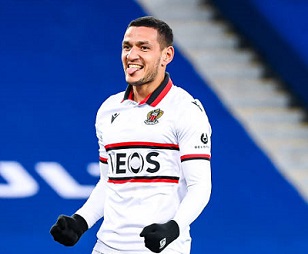 Portugal international Rony Lopes has enjoyed a good week of goalscoring form, after following up his midweek brace in the Coupe de France with another strike as Nice narrowly lost at Ligue 1 champions Paris Saint-Germain.

Lopes scored twice against Nimes on Wednesday as Lille progressed with a 3-1 in in the cup, and his brilliantly-taken equaliser five minutes into the second half gave Nice hope of a result at the Parc des Princes on Saturday. The goal was the first conceded by PSG at home in the league since Mauricio Pochettino took charge.

However, Moise Kean snatched a winner for the champions, who introduced Danilo Pereira late on, leaving Lopes frustrated. “We are a little disappointed with this result, there was a chance for more,” the Seleção man said after the match, before addressing the growing confidence at the club, having been forced to make a managerial change earlier this season in dispensing with Patrick Vieira.

“I feel good,” Lopes said. “It feels good to score to help the team. But it's better to score when you win. We were not clinical, we created chances. The team is growing, of course William (Saliba) and JC (Todibo) are helping the team, they are good players and the mentality has changed.

“We all know that there is a lot of quality in this squad and the players believe. The first half of the season was complicated, we were not confident and declined. The system change has helped the team, I feel better in 4-3-3. We have good performances, we have to continue like this.”